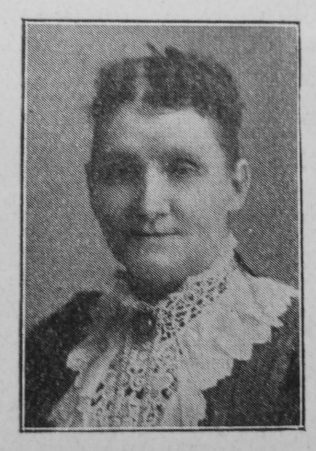 Mary Robson Smith, the wife of the Rev. Frederick Smith, passed from earth to heaven on the 7th of July, 1903. The eldest daughter of Rev. Thomas Jobling, one of the pioneers of Primitive Methodism, as a child she was a great favourite with Hugh Bourne, who frequently visited her parents, and baptised her.

Though from early years religiously inclined, it was directly through the ministry of him who was afterwards her husband that she learned to know Jesus as her Saviour. In 1864 they were married at Salford, and she first shared his lot at Southport, when the three present circuits were one.

In those days, much more than now, a woman who joined herself in matrimony to one of our “travelling preachers ” soon learned the meaning of the name. She accompanied him to Ramsey, Buckley, Helmshore and Accrington, Chester 1st, Southport a second time, Leeds, Oldham, St. Helens, Walkden, York, and finally to Bradford, dying practically on her way to Birkenhead, at her eldest daughter’s home in Eccles, in the very circuit in which she was married, and where her husband became first a local preacher and afterwards began his ministry.

Wherever he went her influence and activity were a blessing to the circuit and a source of strength to him, while she fulfilled the double duties to household and church admirably.

We, her nine children, learned to know God, and to trust Him through being brought daily into His presence, while she besought the Great Father to protect us and open up our way. The Sunday evening services at home for those who could not go to chapel, and the regular family Bible-reading and prayer will never fade from our minds. They were prayer meetings, each boy and girl praying in rotation. These were happy years. As we grew, her influence and watchful care procured situations and then found homes, when we were being left in one town and another. Thus unburdened, she helped in Children’s Sunday evening services, founded Mothers’ Meetings and Junior Classes, which still continue and have “been the means of saving souls.” Bands of Hope always had her active support, and only recently I found among her papers part of an address, stating that although always a teetotaller, she signed the pledge to strengthen me against temptation that met me when six years old. She had marked success in initiating Christmas-trees and Bazaars and in helping those begun by others; while her intense sympathy and zeal go far to explain her husbands success in facing crushing chapel debts. She has sometimes even gone to a week-night service and conducted it for father, rather than let the little gathering be disappointed.

Her first terrible illness was in Chester about twenty-five years ago, when for a month life hung in the balance, but she had so many subsequent ones that we wonder she lived so long.

The last illness was very painful and prolonged, and she did not know till a few days before that the end was approaching. However, two days before she died, on being asked, she said, “I have no anxiety whatever about the future; I settled that with Jesus years ago.”

But we needed no declaration of her confidence in God. All her children had known and felt that from their infancy. And thus it was that facing death, her body racked with pain, she proved the truth of those words, “Thou wilt keep him in perfectpeace whose mind is stayed on Thee, because he trusteth in Thee.” No other power in earth or heaven can give such peace, nor can any take it away. Reason may totter, flesh will fail, but even “Death is swallowed up in victory.” “Thanks be unto God who giveth us the victory through our Lord Jesus Christ.”

Although twenty years’ absence from home has shown the writer her life in its true light, a few typical extracts from many letters received may serve to confirm my testimony:

“She has lived a grand life; a brave woman and a blessed mother, her type are few and far between.” “I thank God for the Christian experience of Mrs. Smith; many a time it has done my heart good to hear her confidence in God.”

“She was the founder of our Mothers’ meeting, and the means of many souls being saved.”

“I shall never forget the influence she exerted on me while stationed at Southport. A model mother, and no one could be better adapted for a minister’s wife.”

“The members of the Children’s Service were always glad to see her face in their midst, and hear her words of love and encouragement.”

Thus lived and laboured a worthy daughter of our Church.

When asking father where he would take her to, she mentioned several places, but he replied, “No, my love. Where could I think of taking you to but where I am going?” She expressed herself as sweetly comforted to know that he would take her remains to his new circuit, as he said, “to be as near your grave as I can get.”

Her six sons carried all that was mortal to its last resting-place in beautiful Bebington Cemetery, but for herself the Saviour has opened the gate into that grander life where –
“Sickness and sorrow, pain and death, are felt and feared no more.”

She still lives, still loves us; she is still ours, and we, trusting in the same Saviour, can all take up the words of her favourite hymn, –
“When the roll is called up yonder, I’ll be there.”

Mary was born in 1840 at Burnley, Lancashire, to parents Thomas Jobling and Sarah Douglas.