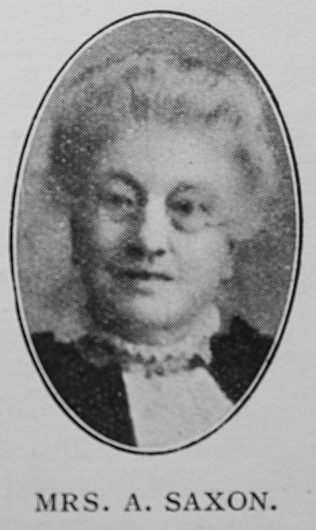 Transcription of obituary published in the Primitive Methodist Magazine by J. Goldthorpe

Mrs. Saxon was born at Abersychan, June 21st, 1847. Her parents were devout Christians, her father being a local preacher and class leader. In such an atmosphere, her young life blossomed into goodness, and at a tender age she joined the Church. Her attachment to her Lord grew until Church and school became part of her life. With years came strength, usefulness, and influence. For her Church she prayed and toiled. Teas, sewing meetings, and bazaars were her delight, and the sisters of the Church gladly accepted her leadership.

She was a helpful neighbour; a friend, nurse, and companion of the sick. Temperance work had her sympathy and support, and she was one of the founders of the local branch of the B.W.T.A. The orphan, the crippled, and the unfortunate evoked her care.

The atmosphere of her home was Christian, and she kept open door. Her family was her first concern.

For more than twelve months she was in failing health until she passed peacefully away surrounded by her sorrowing husband and children. Ministers and representatives of many Churches were present at the large funeral in Trevethan Churchyard, conducted by the writer. On April 9th, a memorial service was held in Abersychan Chapel.

Mary was born on 21 June 1847 at Abersychan, Monmouthshire.