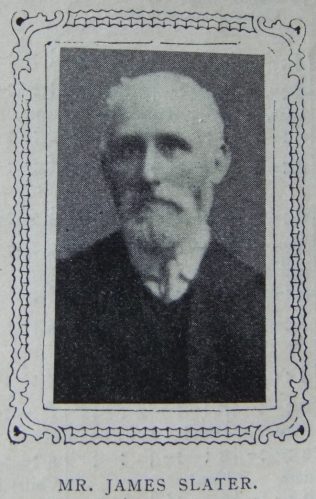 Nearly forty years ago, Bro. Slater was converted in the Northwood Chapel, Hanley Circuit. From that day he has given ungrudgingly of his service and substance to our church.

Week in, week out Bro. Slater toils on, faithful to his various duties, though his work is not done before the footlights. He is content to fill a little space, if God be glorified. His reserve has always to be overcome before he can be persuaded to undertake duties and tasks which others believe him well fitted. The first work to which he gave himself was in the Sunday school. He was also pressed to become a local preacher, and although his services are always appreciated and he faithfully attends his appointments, he prefers the quiet ways of service, and the Sabbath school and the Class meeting claim his special attention. Conscious as he is of his limitations – perhaps too much so – he is ever responsive to calls for the service which he loves to give.

His occupation has necessitated removals at various times, but nearly the whole of his Christian life has been spent in what is now the Stoke-on-Trent Circuit, and to that Circuit he is wholly devoted, taking a living interest in all its concerns and ministries. Ministers find in him a loyal supporter, and with the young he is popular. His zeal for the Kingdom and his loyalty to the church have been much blessed.

Though no longer young, his face is toward the sunrising. He is abreast of the times, and accepts Dr. Maclaren’s advice to “stick to the old Gospel, and not be afraid of new methods.” There is nothing stereotyped in the Class Meeting our brother conducts. His sterling worth and character result in his being beloved by all his members.

From the information in the sketch it is not possible to unambiguously identify James in census returns. Can anyone point me in the right direction.