From Crow Scarer to Gent 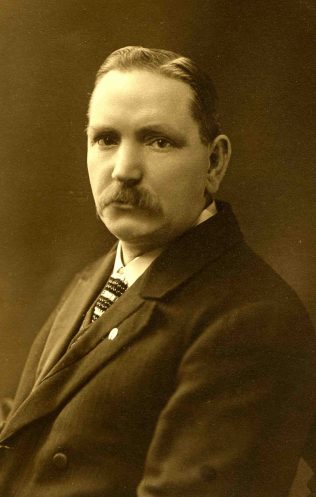 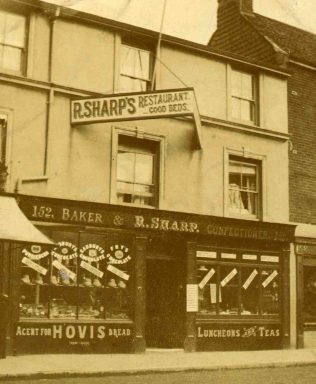 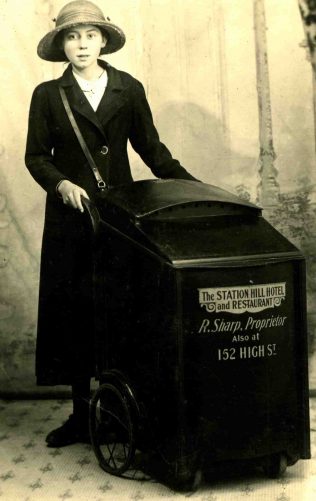 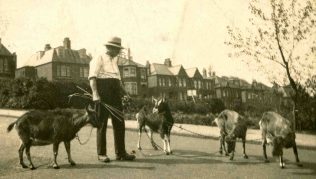 zoom
Richard Sharp with his goats

My grandfather, Richard Sharp, was born on 20th August, 1863, in the village of Leckford, Hants.  He was the first of ten children of Henry and Sarah Sharp (née Andrews) who were married in Stockbridge in 1862.  Henry was an agricultural labourer, but also a pillar of the Primitive Methodist Society in Leckford and a Local Preacher.  It is recorded in the Minutes of the Andover Primitive Methodist Circuit Meeting that he came on Plan as Prayer Leader, 15 March 1858, came up as Exhorter, 15 June 1858, and was raised to On Trial, 20 June 1859.   His contribution to Primitive Methodism in the village was recognised in 1895 when he was presented with a Family Bible as a token of esteem for his long service to Leckford Primitive Methodist Sunday School.   (A total of 60 individuals out of a population of about 250 subscribed towards this presentation, their names and amounts recorded on the back of a Circuit Plan.)

Richard was baptised on 13th September 1863 at Leckford by the Minister, Rev. Henry Yeates.  There is little information about his early life and education.  A few surviving letters suggest that the latter was minimal.  As early as about the age of 10 he was working as an agricultural labourer, at Marsh Court, Stockbridge.

Some time in the late 1880s, however, his fortunes changed.  On 15th October 1889 he married Lily Sarah Smith, in the (old) Primitive Methodist Chapel in Parchment Street.  He is described on the Marriage Certificate as a “baker and grocer.”  Lily Sarah was the daughter of David and Harriet Smith, a leading Primitive Methodist family in Winchester.  In 1851 David had been a plough boy at Barton Stacey, but by 1863 he had established a confectionery business in Cheesehill Street, and about 1866 had moved to 146 High Street.  Perhaps he helped his son-in-law to set up his bakery business.

The 1890 Winchester Trade Directory lists Richard Sharp as a baker at 152 High Street, and in 1891 he placed the following advertisement in the Hampshire Observer (21st November):

I FIND the Bread of good quality, made from pure whole meal only, free from chemicals and up to my standard of excellence.  If the English people only knew the immense value of Wholemeal Bread as a preserver of health, they would make it a regular article of diet, and never eat any other.  It is the best cure for constipation, with attendant evils of piles, varicose veins, indigestion, etc.

[Note: the premises at 152 High Street had been occupied by a baker before Richard Sharp took them over.]

During this period both Richard Sharp’s business and involvement in Primitive Methodism expanded considerably.  Between 1898 and 1899 he took over the Carfax Hotel at 2 Station Hill (since demolished to make way for road widening).  In May 1899 he was a delegate to District Meeting of the Salisbury and Southampton District of the Primitive Methodist Church, held in Winchester  The District Meeting “Plan” contains advertisements for “SHARP’S RESTAURANTS at 2 Station Hill, 24 Jewry Street and 152 High Street, Winchester.  Dinners from 12 to 2.  Cold Joints.  Cooked Hams of the Best Quality.  Tea and Coffee Always Ready.  GOOD BEDS. “ He also acted as host to several other delegates.  He is recorded, in 1900, as supplying, gratis, the celebratory tea at the opening of the new Primitive Methodist Chapel in Chandlers Ford, Hants.  His rising status in the city is recognised by a Civic Invitation to the National Commemoration of King Alfred the Great, in September 1901.

In the same year a young PM Missionary, Rev. Matthew Barron, who had in 1898 been stationed briefly in Winchester, died in Fernando Po (now Equatorial Guinea).  Richard and Lily Sharp took in his widow and their young son Archie, on their return to England until they could find a permanent home.  Later Richard and Lily gave a home to Alice Maud and Frederick Sharp, after the death of their parents, Richard’s brother Harry and his wife.

In 1903 the Winchester PM Society undertook the rebuilding of their Chapel in Parchment Street, which they had purchased some 50 years earlier from the Independents.  Richard annotated his copy of the order of service for the Stone-laying, on 28th May, as follows: “It all went off very well and realised over two hundred pounds, making a total of about £420-0-0”.  He also recorded how much each of the principal participants contributed, noting that the Mayor gave nothing!  (The stone laid by Philip Sharp on behalf of the Sunday School is still visible.)

In 1908 the family moved from the High Street shop to 2 Station Hill for the remainder of their residence in Winchester.  That they did not stay permanently in Winchester was largely determined by an event in 1911.  In the summer holidays of that year, Philip and Francis both caught enteric fever. The In Memoriam article in the magazine of Peter Symonds’ School recorded: “The illness, in the case of Philip Sharp, took a serious turn from the first, and after a period of protracted weakness, complicated by pleurisy, he passed away.”  Philip’s death hit both Richard and Lily very hard.  Philip had left school in 1910 and had intended to train in London as a master baker and take over the business.  Accounts of Philip’s funeral, and obituaries, appeared in at least three newspapers, local and national.  One noted that Richard Sharp had “for a number of years been the hon. Treasurer of the [Winchester Master Bakers’] Association.”  It also spoke of “The respected position which Mr. and Mrs. Sharp hold in the city, more especially in connection with the Primitive Methodist body.”  The Primitive Methodist Leader recorded that “Mr and Mrs Sharp are held in … widespread Connexional esteem.”

Another major aspect of his Connexional involvement was his work with the PM Orphanage Homes (which after Methodist Union became part of the National Children’s Homes, now Action for Children).  The Alresford Orphanage opened in 1889 (followed by Harrogate in 1907) and by 1917 had spaces for 60 children.  Links between the Winchester church and the Orphanage grew steadily.  The second Master, C. F. Turner was a local preacher and the Orphanage was a preaching place on the Plan.  Richard Sharp became Treasurer and as early as 1910 was receiving the lantern collecting boxes, familiar to supporters of NCH.  In October 1913 he undertook a fund-raising tour in Liverpool and in May 1914 he went to the Channel Islands, taking his elder daughter, Margaret, with him to sing solos at meetings.

Reports from the Hampshire Chronicle and Primitive Methodist Leader give detailed accounts of the May Anniversaries and the Christmas and New Year events.  At most of the Anniversaries, the luncheon and tea are described as being “under the superintendence of Mr. R. Sharp” assisted by a team of volunteers from Winchester and Alresford.  In 1916 he was the Chairman for the Anniversary meetings and a member of the Alresford Home Committee.  The Anniversary took the form of a lunch, public meeting with speeches and musical items (sometimes by Richard Sharp’s family) and items by the children, followed by sports and tea.  Charabancs were laid on from London.   The Anniversary reports included accounts of the children’s success in the annual Connexional Scripture Examinations: by 1917 they had won the District “Sharp Shield” (presented to the Sunday School with the highest results) for 4 years in succession.

The Christmas and New Year celebrations included the provision of a Christmas tree and gifts for all the children.  The newspaper accounts record the gifts given by various donors from all over the country.  Richard Sharp (as baker and confectioner) often provided mince pies, and in 1915 he and his wife also gave a box of clothing.  In that year he and Rev. Walter Hammersley (the Winchester Minister) were among the speakers at the celebration, and helped to hand out the presents.

During the War many soldiers passed through Winchester, and in 1915 Richard received a letter of thanks from one Joseph Emrys Jones’ mother for Richard’s kindness shown to Joseph while he was stationed in Winchester.  In 1916 Richard was Circuit Steward when the District Meeting again came to Winchester.  Mrs. R. Sharp is listed as a hostess at 2 Station Hill and Mr. R. Sharp at 152 High Street.  The “Plan” also contains an advertisement for R. Sharp’s Temperance Restaurants and Dining Rooms, 152 High Street and 2 Station Hill.  In the same year Richard paid for a new organ for the Parchment Street Chapel in memory of Philip.  In 1919, when the District Synod met at Bishop’s Waltham, R. Sharp’s was among the photographs included.

In 1920 Richard retired and moved to London with the family, living first at Ingleholme, an 1880s villa in Brockley View, Forest Hill.  There was a large garden and behind that open land, now a public park, where Richard grazed his goats.  By 1933 he had bought a second, larger house, Ripponhurst, with an acre of garden, on the other side of Forest Hill.  Ingleholme was leased in 1936 to a Mr. and Mrs. Carlé , the parents of Freddie, who became Margaret Sharp’s star piano pupil, going on to make a career for himself in South Africa as an entertainer.

During World War II Richard and Lily, with the help of Margaret and Lily’s younger sister, drew on their Winchester hotel experience to open Ripponhurst as a home for people who had been bombed out.  Richard, however, did not survive the war, dying on 24th December 1941.  The 1936 lease referred to him as “gent”.  Thanks to Primitive Methodism, he had come a long way from the boy farm labourer, scaring crows and picking flints out of fields.