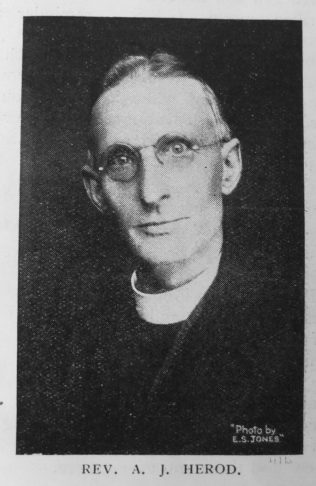 Born at Great Yarmouth in 1872. A well-known minister in the former Primitive Methodist Church, he began his circuit work at Aldershot in 1898, after training at Hartley College. In a variety of circuits he rendered devoted service, beginning in 1916 a seven years ministry in Ashbourne, and a connection with the Derby District which was to last, with the exception of three years at Pontypool, until the day of his death.

Returning to Derby as a Supernumerary in 1935, he became a very helpful friend to all the Derby churches, preaching regularly and addressing all kinds of weekday meetings.

His services as chaplain at what is now known as the Manor Hospital were greatly appreciated, and his pastoral work brought comfort and cheer to the people to whom he ministered so conscientiously.

Many people in all walks of life looked upon him as their friend and gave him their affection. His cheerful spirit was an inspiration, especially during the suffering of the last few months of his earthly life.

He passed to higher service on 29th October 1949, in the seventy-eighth year of his life and the fifty-second of his ministry.

Arthur trained as a shoemaker before entering the ministry.

He married Annie Eliza Lewis (1873-1958) in the summer of 1902 at Cheltenham. Census returns identify two of three children.