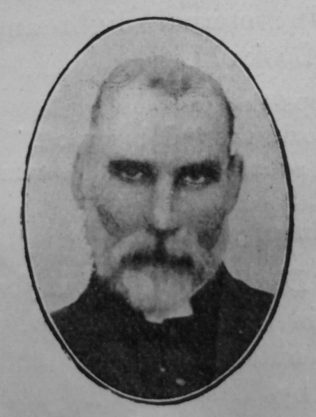 Transcription of Obituary in the Primitive Methodist Magazine by George Fowler

The Brinkworth and Swindon District has sustained a severe loss in the death of Rev. William Haddow. This occurred on the 28thSeptember, 1904; after a painful and prostrating illness. He was buried in the cemetery at Brinkworth, Wilts, on the first day of October.

It was on the 17th July, 1883, that he came direct from his home In Scotland (Motherwell), to Faringdon, Berks., in which circuit he and the writer spent two very happy and successful years. Our deceased brother laboured in the following stations:- Faringdon, Newcastle-on-Tyne, Wirksworth, Thirsk, Metcombe, Camborne, Brlnkworth (seven years), Wallingford, and Andover; making twenty-one years in all, and finishing his course at the age of forty-seven.

His ministry in the Faringdon Circuit was made a blessing to many, and in the other stations he laboured with great acceptance having many seals to his ministry.

“As a preacher, he was far above the average, and in ministerial work and business of the circuit, he was most zealous and untiring.”

On the death of the late Rev. T. Kench, the officials of the Brinkworth Circuit requested him to take superintendency of the station. This proved a wise step. The circuit continued to prosper, and the officials and members were loath to part with him when his seven years came to an end.

He was the General Committee Delegate in 1903, and delivered the charge to Rev. A. Marshall, who that year finished his probation. This address was one of very high order and will ever be remembered by those who were privileged to hear it.

He had also prepared an address on the recently passed “Education Act” of 1902, but was unwell, and the Rev. J.E. Sunderland took his place and read the address to a crowded audience.

The address was one of great excellence. Mr. Haddow was requested to publish it; and it has had a very extensive circulation.

His years of devoted and useful service to the church of his choice, had their root in his early conversion and the love he had for reading. Good books were his delight. He has been known to walk from his home into Glasgow – a distance of seventeen miles to obtain a new book. His journeys to and from his daily toil, were spent in study.

He was converted when a boy of twelve. He “roused his father and mother in the middle of the night to tell of his deep concern; then went back to bed with his new found joy.”

He became “a very successful Sunday School teacher. Three years in succession, – at changing time, he sent up a converted class. Sometimes the lesson was stopped, and boys and teacher knelt together in prayer. He began to preach when sixteen years of age. His name was put on the plan by Rev. G. Parkin, B.D.” When “a local preacher, the word preached was accompanied with the power of the Holy Spirit. He would frequently conduct revival services on his own circuit; always with success, for many were added to the Church. His conversion at twelve made a complete change in his conduct. From being the big boy to be feared, he became the big boy to be loved.” In these services “at times, even as a youth” he was “completely carried away in his preaching.” On one occasion “preaching the opening sermon of a Revival Mission in Shieldmuir Chapel from the text ‘Come unto Me,’ etc. – the ‘Come’ so impressed him that he repeated it again and again.” At this point “a rough ungodly man, who had come into the chapel, left his place in the back, walked down the aisle saying;- ‘I’m coming, Willie,’ and the sermon suddenly came to an end, while a well known Gospel hymn helped this seeking soul and many others, that night, into the Kingdom,” – so writes Mrs. Hamilton Haddow.

His brother James informs me, that “he (his brother William) was Society Steward at Shieldmuir,” and that “he was elected President of Wishaw ‘Young Men’s Christian Association,’ ” and that his services were frequently in request for other churches besides his own. Also that he was helpful to several temperance societies.

It will be seen that although our late brother’s sun has gone down, while it was yet noon he accomplished a great work in the thirty-five years – in which he gave his life “for Christ and the Church.”

This was very impressively pointed out in the address delivered in the Chapel at Brinkworth on the day of the funeral, by Rev. John Neville of Newbury (District Secretary); he said:-
“The spirit of our gathering here to-day should not be so much one of sorrow and lamentation as joy at the thought of a life so well spent and a reward so sure upon which he has entered.

Mr. Haddow possessed a character of rare excellence. He was reverent, devout, and prayerful. His religious spirit was earnest, ardent, and intelligent. His whole body, spirit and soul, were laid upon the altar of service and sacrifice. His piety was of a manly type; absolutely free from all pretence and manifested itself in deeds of noblest kind.

These mental stores he consecrated to the effective ministry of the Word. The results of such a ministry eternity only can reveal!

As a toiler in the Master’s vineyard he was most laborious. What sweat of brain he put into his pulpit efforts, what painstaking was there in all business matters for which he was responsible.

There is one thing on account of which I myself feel a real regret, – and that is because I took part in pressing him to take upon himself the work of General Committee Delegate. I knew if he did take it nothing would be shirked. He did take it, and nothing was shirked. But the burden of detail was too much, in connection with the public work he undertook at the District Meeting of 1903. His paper on the ‘Education Question’ was of such value that he was requested by the District Meeting to publish it. Then his charge to the young minister was of the highest order.

In the finishing up of that deliverance he gave himself away. I saw that he went out of himself, and he never came to himself again. Who then shall conceive the reward of such a ministry? But it has been made manifest; the day has declared it; for it has been revealed by fire, and the fire tries ‘every man’s work of what sort it is.’

May God comfort the hearts of widow and children, and may we all look forward to the ‘day break when all shadows flee away.’ ”

The funeral was one of the largest and most impressive ever seen in Brinkworth. “A large number of friends from Wootton Bassett, Cricklade, Purton, Goatacre, and other places in the circuit assembled at the Manse at 2.30, when the cortege left for the Chapel. The ministers of the district preceded the bier, deceased’s relatives and friends following. At the Chapel the first part of the service was conducted by Revs. G. Fowler and G. Morris,  and the Rev. J. Neville (Newbury) gave an address on the character and worth of deceased.” As the procession entered the Chapel the ‘Dead March’ in Saul was played on the organ, and on leaving Chopin’s ‘Marche Funebre’ was rendered.

At the cemetery the concluding part of the service was taken by the Revs. J. Neville and W.C. Tonks, (superintendent of the circuit). The lovely floral tributes, the first being ‘from his sorrowing wife and children’ – bore testimony to the high esteem in which he was held. The following ministers, as well as a number of local preachers, attended the funeral: Revs. T. Smith (Wootton Bassett), J.W. Fish (Farringdon), C. Lomas, G.H. Howgate (Swindon) and F.J. Harper (Brinkworth).

William was born on 9 September 1857 at Bellshill, Lanarkshire, to parents Henry Haddow, a coal miner, and Janet Kelly.

He married Rose Walker (1855-1942) in the summer of 1887 in the Portsea Island Registration District, Hampshire. Census returns identify two of three children.