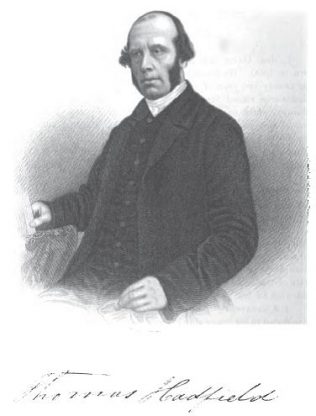 Thomas was born on 5 January 1810 at Doveholes, Derbyshire to parents John Hadfield and Peggy Hartle. He was baptised on 4 February 1810 at Peak Forest, Derbyshire. Thomas was converted through the preaching of an unknown female preacher at Chapel-le-Frith in 1828.

Thomas went on the plan in 1832 and worked as a local preacher for two years. He moved to Manchester during this time and joined with the Jersey St Society. He worked as a banksman at the coal pit. In 1835 he became a Primitive Methodist Town Missionary in Manchester and started to travel the following year, starting in Blackburn.

In his obituary he is described as ‘ an upright man, a sincere Christian and a zealous and successful minister’.

Thomas married Sarah Clayton on 3 April 1840 at St Mary Bury, Lancashire. She died on 14 April 1849 in the Isle of Man. They had two children.

The obituary for Thomas in the Primitive Methodist Magazine says that Thomas left a widow and two sons to mourn him. This suggests that Thomas married again after the death of Margaret and one further son hasn’t been identified.