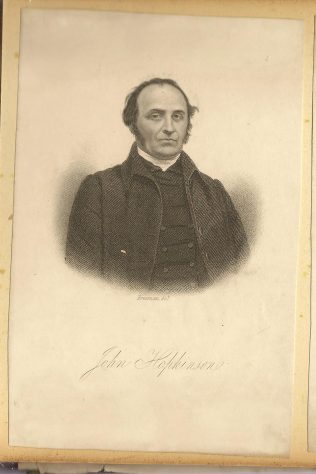 John was born on 29 June 1801 at Ardsley, Yorkshire.  His father was called Matthew. Kendal relates that John’s mother had allowed William Clowes to use her house on his visits to Ardsley from Hull.

Kendall writes; ‘He  received his first spiritual good amongst the Wesleyans, but when John Verity was expelled for complicity with ” Ranterism,” he joined the new community. His reasons for doing so, as stated by himself, are worth giving. They were: (1) His strong attachment to J. Verity, who was his guide, philosopher, and friend. (2) The simple, pointed style of their preaching was congenial to his taste. (3) Their open-air movements he cordially approved. (4) Their field of action found employment for talents of the humblest order. So, under the stress of these views and considerations,
he became a Primitive Methodist.’

John began to preach in 1820 and three years later entered the ministry.

In summing up his character and work his biographer says: ‘He was an exemplary Christian and a laborious-minister. . . . He was connected with the admission of 3700 members into society; his prayers were pointed; his sermons well arranged and powerful; he travelled on twenty -five stations. He faithfully served God and his generation, and his end was peace.’

H B Kendall, Origin and History of the PM Church, vol 2, p68