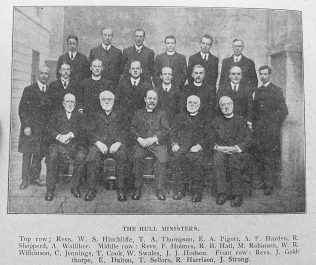 ALFRED FRANK HAYDEN: born in 1889 at Eltisley, Cambridgeshire. Before going to Hartley College in 1913 he was engaged in work on a farm. His early educational equipment was slender; yet, while his interests were never academic, hard work and an excellent memory kept him well informed, and his knowledge of the Bible was great. He was probably one of the greatest pastors Methodism has known. His love and concern for men and women, especially those of his own flock, opened the doors of people’s lives and he was welcomed into the secret places. Add to this his courage and determination, and one begins to understand the profound impression that he made on the lives of so many. Because of him there are a number of men in the Ministry, a considerable number have become Local Preachers, and the company of those who have been led to face the claims of the Gospel must be very large.

He was never a man with a special interest: he was a shepherd of the whole flock; and whether people were young or old, rich or poor, cultured or ignorant, mattered not to him; he had remarkable success with all sorts and conditions of men. The rather impressive results of his ministry and the very remarkable affection which he evoked from his people in all his churches is still somewhat of a mystery even to his most intimate friends; they cannot be explained as due to purely human qualities; they derived from his reverence and love for God. He was a good man and a faithful Methodist minister of whom God would not be ashamed. He died suddenly on 7th July 1949, in Liverpool, where he had gone to attend the Conference.

Alfred was born on 29 August 1889 at Eltisley, Cambridgeshire, to parents Alfred Childerley Hayden, a farm labourer (1891), and Ellen Brown.

He married Edith Mary Howlett (1890-1947) in the summer of 1918 in the Caxton Registration District, Cambridgeshire.

Alfred died on 7 July 1949 at The Northern Hospital, Liverpool, Lancashire.