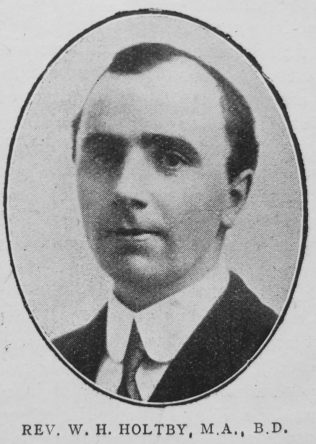 Transcription of Sketch in the Christian messenger by J.G. Bowran

The Holtby family is one of the most distinguished of our Church. The father, the Rev. T. R. Holtby, has just passed away at Peel, in the Isle of Man. The eldest son, J. Robert D. Holtby, M.D.,B.Sc., died but a few months ago. He was the lecturer of Astronomy at the Dublin University, and seemed destined to have even a greater career. Another brother, the Rev. E. Barlow Holtby, M.A., B.D., is in our ministry. The youngest son, Mr. Harold Holtby, was a medical student at the Durham University, and has entered as a surgeon probationer in the Navy. Our photograph is that of the Rev. Wm. Henry Holtby, M.A., B.D., of Beverley.

The larger part of his boyhood was spent in Ireland, where he attended the Methodist College, and a boys’ school in Belfast. Later he went to the Ludlow Grammar School in Shropshire, the school where Dr. Peake received part of his early education. When only seventeen years of age, W. H. Holtby entered Oxford Universitv, and before he was twenty secured his B.A. degree, and afterwards received the M.A. While at Oxford he studied theology under Dr. Sanday at Christ-Church, and Dr. Lock at Keble College. He also attended certain classes at Mansfield, then under the principalship of Dr. Fairbairn. In 1911, he entered Hartley College, studying also at the Manchester University, where he ultimately proceeded to the B.D. degree. While a student at Hartley, he was appointed to the coveted Student Secretaryship, and was chosen to speak at the Students’ Missionary Anniversary. In connection with the Parliamentary Debating Society, he was elected “Prime Minister” and formed a “Government.”

Before entering the ministry, Mr. Holtby had travelled widely, visiting Spain, the Argentine, Uruguay, Brazil, the West Indies, and the United States of America. We judge that this experience is quite unique amongst our younger ministers.

When only fourteen years of age he was on the Ludlow Circuit Preachers‘ plan, and while still at school was preaching every Sunday, and was widely known as the “boy preacher.” His probation was spent at Filey in Yorkshire. He is now in his fourth year at Beverley, and has promised to go to Darlington in July next. It is greatly to his honour that he has secured these academic distinctions, and we are delighted to know that all his gifts are dedicated to the highest service in the world.

WILLIAM H. HOLTBY, M.A., B.D.: born at Crowle, Lincs, November 18, 1887, the son of the Rev. Thomas R. Holtby. He was educated at Ludlow Grammar School and Saint Catherine’s College, Oxford. He entered the Primitive Methodist Ministry in 1911, being trained at Hartley College and Victoria University, Manchester. His gracious personality endeared him to all among whom he laboured, and in all the circuits in which he travelled the influence of his ministry will long abide. Preaching was his passion, and to the ministry of the Word he devoted the qualities of a richly stored and scholarly mind and of a truly devout soul. As preacher and lecturer he was well known among the Methodist people, and through the medium of the radio his gifts received recognition in a still wider circle, his first wireless service being the occasion of the first Methodist Empire broadcast. Since 1921, as an examiner in probationers’ studies, preachers on trial found in him a wise counsellor of quick understanding and ready sympathy. Modest, completely honest and sincere in all things, and utterly devoted to his calling, he was a minister of God whose warm humanity made him greatly beloved of all who knew him. He was in indifferent health for some months, but his death came suddenly on October 31, 1937, at the early age of forty-nine.

William was born in 1886 at Crowle, Lincolnshire.