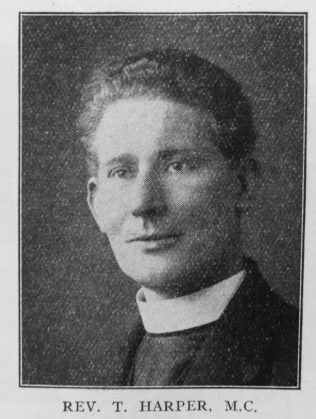 THOMAS HARPER, M.C.: born in Stourbridge on 5th December 1892. Coming from a good Methodist family, he was accepted as a candidate for the Primitive Methodist ministry, going to Hartley College in 1914, but when war broke out he volunteered for service, first in the R.A.M.C. and then as a Chaplain. It was for his courageous ministry of comfort and encouragement to the troops in the trenches that he was awarded his Military Cross. In the 1920s and 1930s he gave energetic support to the League of Nations Union out of his concern for peace and justice. He returned to the Army for a further six years Chaplaincy in World War II serving in the Far East, in Assam and Burma.

Tom met his first wife Jane during the First World War, when she was a nurse, marrying her in 1918. After the War they moved to Romsey where their three children, William, Lewys and Megan were born.

He was a man who was close to his Lord and close to those for whom he cared. His radiant faith shone on his cheerful face. Whenever he prayed his body seemed to fill with the power of God and his voice trembled with love and wonder.

Tom’s wife died in 1939 and in 1947 he married Frances, who was to be his loving companion and support until his death. He will be remembered and loved for his inspiring preaching, his energetic pastoral work, his warm welcoming smile and his love of his people. He had a particularly fine ministry among men. The evening before he died he had chaired the Men’s Fellowship at Church Road, where his opening and closing devotions were much appreciated. On returning home he was taken ill and died the next day, 3rd October 1978, in the eighty-sixth year of his age and the sixty-fifth year of his ministry.

Thomas was born on 5 December 1892 at Lye, Stourbridge, Worcestershire, to parents Anthony, a manager at iron works (1901), and Mary. His brother, Wilfrid, was also a PM minister.

In 1911 he was an apprentice at an iron works at Brindles Ford, Tunstall, Staffordshire.

He married Frances Mary Dawson (1901-1991) in the spring of 1947 in the Salford Registration District, Lancashire.