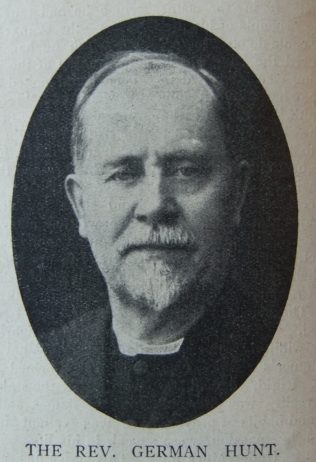 German was born on 18 April 1859 at Langley, Derbyshire, to parents Henry and Elizabeth. Henry was a cordwainer (shoe-maker).

From 1917, German undertook the office of General Sunday School Secretary. He was prominent in establishing Holiday Homes at Buxton and Scarborough.

He was treasurer of the Superannuated Ministers Widows and Orphans Fund.

German was a good cricketer with a sound defence, and a powerful stroke.

His obituary records that German was courageous and resolute, but chivalrous and keenly alive to movements in religious thought, politics and social reform. He had a genius for friendship and fellowship. His ministry grew in quality and influence as the years passed. He proclaimed the Gospel as the only sufficient means of salvation and help to men. Practical duty and daily toil with its problems and temptations were brought into its light. His ethical teaching was searching and his standards of morality high, but capable of attainment through the grace of Christ. He had a catholic mind, and his loyalties and generosities found exercise and scope in organisations like the Free Church Council, Sunday School Union and philanthropic institutions.

His pastoral work revealed his intense human interest. He devoutness of spirit, unbroken fellowship with God, and knowledge of the things of the spirit, shone through all that he said and did.

Following retirement from the active ministry in 1925, German served as chaplain to the three Public Assistance Institutions in Leeds.