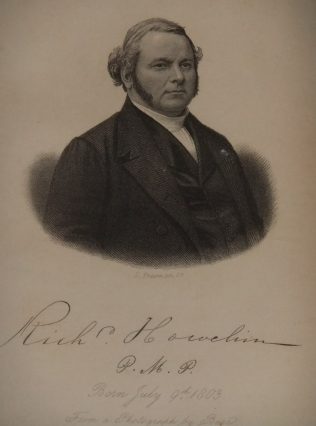 Richard was born on 9 July 1803 at North Weald, Essex. Richard’s parents were baptists.

Richard’s obituary records; ‘It is said by those who knew him intimately that he belonged to that class of individuals who cannot specify the exact time and place of their conversion, but who seem to grow into religion somewhat after the fashion in which the day comes upon the inhabitants of frigid zones, slowly but surely, the light increasing more and more until the sun, mounting above the horizon, flings broadcast his beams and bathes the earth with floods of golden splendour.’

Richard consecrated himself to Gods work at a Camp Meeting in London in May 1823. He united himself with the Primitive Methodists and soon became a class leader and local preacher.

Richard spent some time as a hired local preacher in London before becoming an itinerant  preacher.

When, in 1833, the Wangford Branch was made a circuit, with Richard Howchin as its superintendent, it reported 233 members. Extensive missionary operations were at once begun in the surrounding villages. More than a score of these were visited, and many of them were morally transformed. The result was seen in the report of 540 members given to the Conference of 1835.