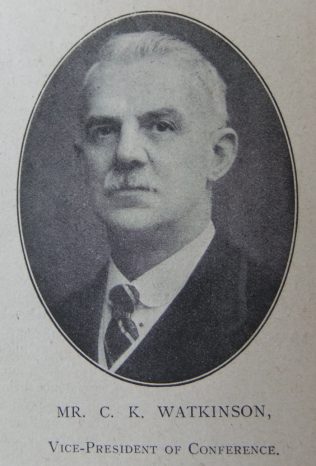 Charles was born in 1858 at Market Rasen, Lincolnshire, to parents George Spencer Watkinson and Susan.

George became a Primitive Methodist local preacher in the Grimsby area. At the age of twenty-one, George moved to Market Rasen, where he soon became a class leader, choir-master, school superintendent and circuit steward. He worked as a tobacco pipe-maker. Trouble arose which resulted in George becoming a Free Methodist. Three daughters remained with the Free Methodists, but his five sons, all returned to the Primitive Methodist Church on migrating back to Grimsby. The brothers all became fish merchants.

Charles was the first of the brothers to settle back in Grimsby. By trade he was a joiner, but he soon identified that joinery tools were not the most likely instruments to carve out a fortune, and he forsook them.

On returning to Grimsby, Charles soon became a teacher at the Ebenezer School, then its secretary and then one of its superintendents, an office he held for eight years.

Charles became a preacher, although he felt that his early efforts were totally inadequate when he accompanied his brother Mr Tom R Watkinson.

For many years Charles fulfilled the duties of trust treasurer, class leader, choirmaster and circuit steward.

Charles was Vice President of Conference in 1921.

Contribution to the Community.

Charles was a forceful advocate of Temperance and an eloquent exponent of Liberal politics. He became a county magistrate in 1913. Entreaties to enter municipal life fell on deaf ears, the call of the child, however, he could not resist and he served as Chairman of the Cleethorpes School Board and subsequently of the County Education Committee.