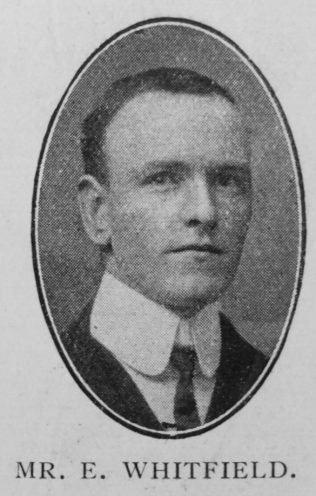 On August 6th our beloved brother, Edward Whitfield, passed into the unfading light of the Eternal Presence. Born 27th March, 1884, he was from childhood associated with our cause at Dudley Road, Wolverhampton. Surrendering himself fully to Christ, he became a most devoted worker. As a Sunday School Teacher he realised the need for heart and mind culture. His small library of books was remarkably well selected and well read. Among other aids he found much help from attendance at a Mens’ Bible Class, where he was found at 7.30 every Sabbath morning. As a true Christian Endeavourer he was whole-hearted in obedience to its principle of loyalty to the Church. He was a fine type of the ideal Primitive Methodist Churchman.

Just when his powers were the ripest and he seemed most influential for good, he was taken from us, bit he leaves behind a memory fragrant and uplifting.

Edward was born on 27 March 1884 at Wolverhampton, Staffordshire, to parents Daniel, an edge toolmaker, and Emma.