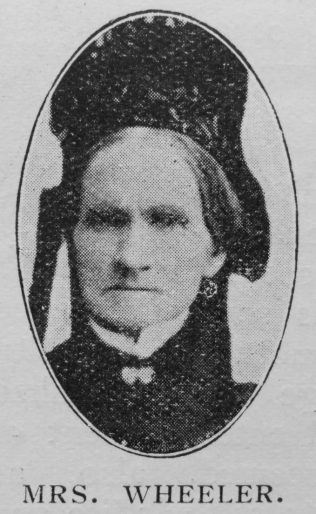 Mrs. Wheeler was a most earnest worker in our Church at Okeford Fitzpaine, on the Sturminster Newton Circuit, and had the honour of starting the Sunday School there more than 50 years ago.

She was one of those bright Christians who believe that “all things work together for good to them that love God,” and always looked on the bright side of everything. When anyone began to find fault she always had a very kind way of  rebuking them, and so exerted a great influence for good on all with whom she came into contact.

Through plowed and sunshine Mrs. Wheeler was ever loyal to the cause, and when asked to help in any way, never refused to give or to do what she could.

In her last days she suffered much, and for twelve months lay in the grip of a serious illness; her pains were terrible, but when anything was mentioned to her about her sufferings she would reply, “Ah, the Lord knows best.” Her end was peaceful and happy, as was fitting for one who had lived such a good and unselfish life. At the ripe age of 70 years she passed to the everlasting rest, mourned by her husband and family and a large circle of loving friends. After pain and suffering she has gained the great inheritance.

Before her marriage Emily worked as a house servant (1861).

Emily died in the spring of 1909 at Turnworth, Dorset.