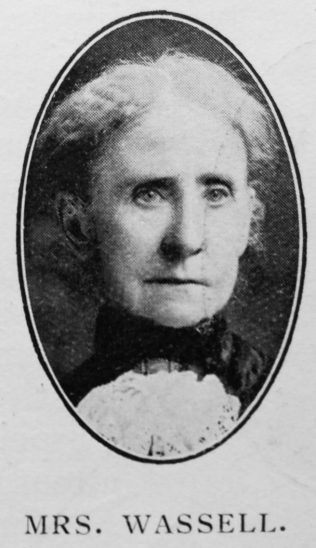 Transcription of Obituary in the Primitive Methodist Magazine by J.W.C.

One of our great artists, G.F. Watts, the painter of the mythical imagination, has depicted the Angel of Death, a great, grey, overpowering figure pushing open a cottage door, and Love is depicted as a slender figure offering a weak resistance. Love cannot stay the march of death, though love indeed may become, through Christ, the conqueror of death. This silent angel has broken down love’s resisting bonds and touched with his icy finger another friend. And Mrs. Wassell was taken, unhappily, while the life of her husband was still hanging in the balance. He is spared, but she has gone – home!

Mrs. Wassell was the sister of Mr. Morton, to whom in large measure we owe the very existence of our Church in Motherwell, and when the first chapel was built Mr. and Mrs. Wassell were the first to be married within the walls. Their connection with the Church ever since has been close and intimate. In every important function in which the service of ladies is needed Mrs. Wassell has taken an honourable part. And the present bazaar work claimed her fullest sympathy, even in her weakness – indeed her needle lies as she left it in some material upon which she had been working when she attended the last sewing meeting; and she said as she left: “Don’t touch that, I will finish it when I return” – but she never returned.

The call came suddenly, but she was ready. In quiet, unostentatious labours she excelled. She was of refined and gentle spirit, of tender heart and winning manner. She hath done what she could in patient and loving devotion, and left us a precious inheritance, a memory rich in deeds of loving kindness, deeds wrought in God. Such deeds are their own memorial. She passed away after serving the Church for upwards of 50 years, at the age of 73, on February 28th, 1910.

Note: Date of marriage inferred from the date of building the chapel in Milton Street, Motherwell.