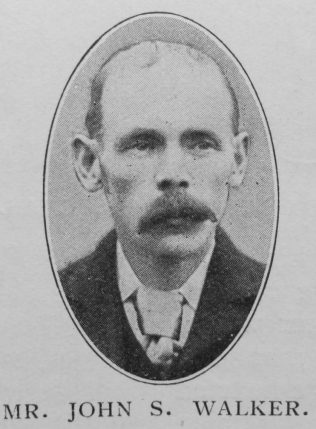 Mr. John S. Walker of the Duke Street Society, in the Doncaster Second Circuit, was called away with startling suddenness on Tuesday, 19th April last, at the age of 55 years. He was born at Brandesburton, near Beverley, and as a boy attended the Wesleyan School there. He came as a youth of twenty to work in the Railway Plant at Doncaster, and remained there to the time of the illness of a few days’ duration which terminated in his death.

His earliest religious impressions were received through visiting a house, which was a portion of our Duke Street property, and hearing the testimonies at the class meeting, which was held in “the upper room.” His conversion took place at an open-air service conducted by Dr. Christie Wilson’s mission workers, and he immediately joined our Duke Street Society. For some twenty-six years he was an acceptable local preacher in the Circuit, making a beginning in this direction by taking work in association with the Mission Band.

As a man, he was of a very energetic type; having no lazy moments, but filling up his evenings with useful pastimes of some profitable description or other. As a preacher he had a distinct contribution to offer to the congregations, a message thought out, put together, and delivered in his own unique and forceful style. He was a preacher who delighted in children, and hence one whom the children always welcomed. And as an open-air speaker he excelled. The Circuit generally misses him and feels keenly the loss it has sustained in his departure.

We assure the widow who mourns his loss, and the six daughters also left behind, of our truest sympathy. They have lost a husband and a father of the highest possible order, and the Circuit has lost one of its most reliable local preachers.

John was born in late 1854 at Brandesburton, Yorkshire, to parents George Walker, a cordwainer (1861), and Anne Shanks.