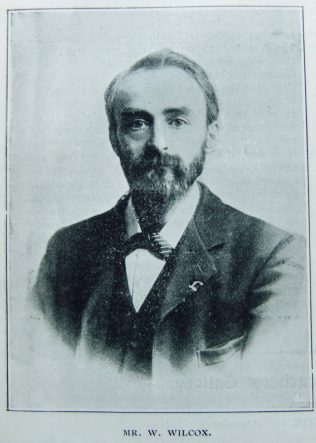 Transcription of Sketch in the Christian Messenger by T.G.

The local preacher whose portrait we give this month is well known in the valleys of Glamorgan and Monmouthshire, and “worth knowing” beyond them. For over twenty years Mr. Wilcox has unstintedly served these churches and laboured to save men, and there is no name in the district more highly esteemed. He is a devoted Primitive Methodist, and takes a keen interest in Connexional and district affairs, as well as those of his own Circuit. The District Meeting elected him as a delegate to the last Conference.

While Mr. Wilcox is an able administrator, he is best known and most useful as a preacher. For this ministry, gifts of no mean order have been bestowed on him. An ardent lover of God and Truth, he is a seer. Through the Holy Spirit he perceives what the prophets and apostles saw, even the deep things of God, and what he sees he can express in the language of everyday life, so that others are able to see also.

ln youth our friend was recommended for the ministry, but failed to pass the doctor. From one point of view this can only to be regretted; but from another it awakens gratitude, for such laymen give tone and strength to churches and circuits. He himself feels he is fulfilling the Divine call as a business man and lay minister.

The impression made upon one’s mind by an everyday acquaintance with Mr. Wilcox is that his whole life – Church work, business, home – is instinct with the Spirit of the kingdom. The light from the Throne radiates in every department. His wife and family are like-minded. The children have been in the Church, as well as the kingdom, from infancy. For many years a certain portion from the proceeds of the business has been transferred to the “Lord’s account,” a token that the whole is held in trust. Religion is never in the slightest degree used as an auxiliary to business, but the business is one way of serving the Lord and promoting the evangelization of the people. A well-known advertisement, for example, leaves a more vivid impression about “The Great Revival” than that certain work can be done at such an address. Religion is the soul of that business.

Mr. Wilcox believes there is not far ahead another great ingathering of men. The sound of rain is in his ears because he sees neglected altars being rebuilt, believers’ limbs, halting from weakness, made straight and strong, and God answering by fire. Holiness and optimism are closely allied. Mr. Wilcox is an optimist because he believes in holiness. He preaches the necessity, possibility, and blessedness of the consecrated life. The notes of his ministry are Holiness and Evangelism.

If appointments to responsible positions by District, Circuit, and Society be “honours,” then our  brother is heavily laden with them. He has done almost the work of a second preacher, so far as preaching goes, on the Aberdare Circuit. At Cwmaman his life is bound up with the Church. For many years, while the locality was mostly Welsh, he and a few others sustained the work, hoping for the day of larger things. About two years ago the revival came. It seemed the bursting forth pent-up spiritual force accummulated by prayer and faith. The work at first was among the young people. A C.E. Society was formed, of which Mr. Wilcox became the president. Of the 36 members, 32 are the product of this work of grace, which still goes on. He who sowed in tears now reaps in joy, and the harvest has been almost more than the workers could garner. By request of his own Church Mr. Wilcox takes the pulpit one Sunday a month, and, in addition to preaching, he superintends the Sunday School, and takes an active part in temperance work.

Mr. Wilcox is a brother whose work and influence never suggest self-interest or ambition. His character is a combination of sagacity and saintliness, like a fire that has burnt through the stage of blaze and smoke to that of maximum effectiveness – the glow and steadiness and purity of white-heat.

William was born abt 1858 at Argoed, Monmouthshire, to parents William and Lucy Anna. William senior was a coal miner.

William worked as a printer and bookbinder.

He married Mary Hannah Evans (1859-1910) in the spring of 1882 in the Mertyr Tydfil Registration District. Census returns identify seven children.

I have not been able to unambiguously identify William’s death record.