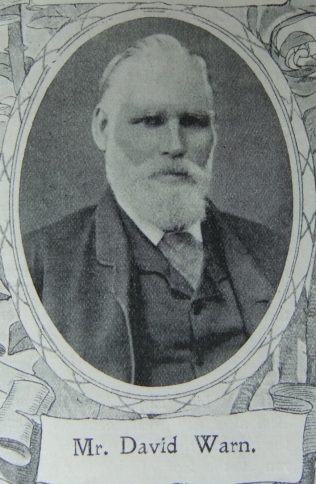 The Circuit Steward of Norwich III. Has been associated with Primitive Methodism all his life. In the “hungry forties” he worked many hours on a farm for his weekly wage of one shilling and a mutton dumpling. From the farm he passed to the service of the Great Eastern Railway, where he rose step by step till after nearly fifty years’ service he retired from his position as an inspector of the permanent way. After joining the class at old Lakenham chapel, Norwich, in 1860 he experienced six months of fearful spiritual struggle. It was beside the metals a few yards out of Thorpe station that his vision of Christ came. The cause of Christ and the interests of our Church have ever since been supreme. He was a leader in the forward movement at Thorpe. Though his favourite hobby is to sing the hymns of our fathers from an old book with yellow leaves and mended back he keeps young at heart.

David was born on 1 January 1832 at Pulham Market, Norfolk. David was baptised on 10 February 1833 at St Mary Magdalene, Pulham, Norfolk.

David started work on the railway as a platelayer and retired as District Inspector in 1905.

When living at Strumpshaw, his house was licensed for preaching, and for years services were conducted there every Sunday evening, and once a week,