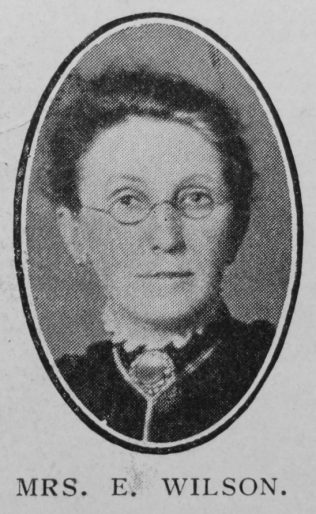 Transcription of obituary published in the Primitive Methodist Magazine by H.Y.

Mary Elizabeth Wilson, wife of Mr. W. Wilson, was born at Towlaw in the county of Durham in the year 1862. Removing soon after to Dipton with her parents, the earlier portion of her life was spent amongst the Wesleyans, and she became a member of the choir. From her youth she was a devoted Christian, and an active worker in the Church. On her marriage she joined our society at Dipton. Her membership was afterwards continued with our society at Blaydon-on-Tyne, where she acted as Treasurer for the extinction of the chapel debt.

For twenty-four years at Blaydon her association with our Church was marked by great steadfastness and zeal. She was a leader in good causes and gathered round her many friends and co-workers. Her example ever shone brightly in Christian consistency, generosity, and love for the house of God. She seconded well her husband in his lengthened term as Society Steward.

Her influence as mother in the home has borne lasting fruit. Her children can truly call her blessed. She suffered long and much in her health, and on this account removed to Whitley Bay; but after two years the family came to Heaton, Newcastle-on-Tyne Third Circuit, hoping for her recovery. But after fifteen months of patiently-borne affliction she entered the heavenly rest, April 26th, 1911, aged 49 years.

The writer’s frequent visits to her sick chamber were seasons of rare communion. Hers was the cheerfulness of a Divine peace and an assured hope. The interment took place at Blaydon. A large company attended the services at the chapel and the grave, which were conducted by Revs. H. Yooll and G. Newton.

Elizabeth died on 26 April 1911 at Heaton, Newcastle upon Tyne, Northumberland.