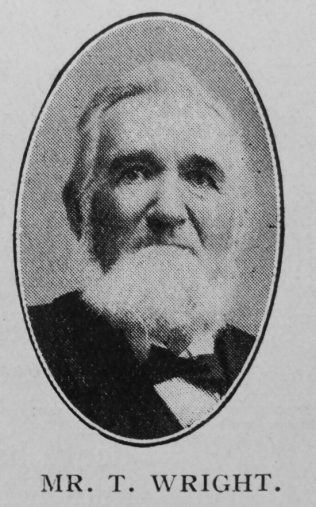 Transcription of obituary published in the Primitive Methodist Magazine by P.J.F.

Born at Aldersey seventy-three years ago, Thomas Wright early in life dedicated himself to God. He had the honour of being one of the founders of our Alpraham and Bunbury Sunday Schools, and worked hard for the erection of the present chapel at Alpraham in 1882. He was a trustee of this property, and of that at Bunbury and  Wettenhall.

Always eager for the prosperity of the Church, he must have collected hundreds of pounds on its behalf. His later years were spent in membership with Wettenhall Society, and he was Superintendent of the Sunday School until the day of his death. He had the buoyancy, the hope, the gentleness and geniality of a man unspoiled and unembittered by the multifarious experiences of a long lifetime.  He was diligent in business, given to hospitality, constant in kindly ministries.

He was interred in Bunbury churchyard, Mar, 23rd. A memorial service was held on the 31st.

Thomas was born abt1839 at Aldersey, Cheshire, to parents William, a labourer, and Sarah.