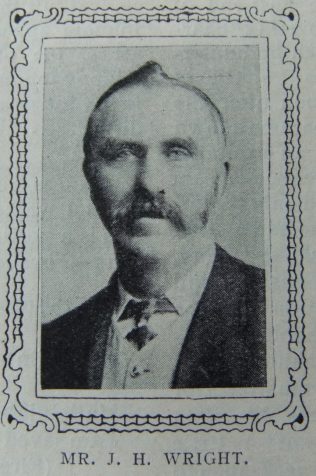 MR. J. H. WRIGHT, the highly esteemed Society steward of our thriving church at Thirsk, has a long record of service behind him. He was born in 1852 and converted when a scholar in the Brompton Sunday school. He came to Thirsk thirty years ago, and has always been an energetic and enthusiastic Christian worker. He has been a local preacher about thirty-five years, and in great demand for anniversaries and special services. He has been the superintendent of the Sunday school for eighteen years, and a Class leader for the same period, in fact there is no office to which he is eligible that has not been occupied by him or open to him. Twelve times he has represented his Circuit in District meeting, and he has also seen Conferential service. It is however, in his office of Society steward that he finds his ideal sphere of labour. In addition to the work of Society steward he superintends the Sunday school. He shines in the Prayer and Class meetings, and lends his lusty voice in song and prayer. Then amid the stress and strain of modern business life our brother has been able and willing generously to contribute. All this has been combined with an unswerving loyalty, which has stood the severest tests been equal to the demands of personal inconvenience and sacrifice. The prosperity of Zion is his heart’s delight, and it is impossible to estimate the heavy debt that Thirsk Primitive Methodism owes to him. Some degree of heart failure has of late warned him that his life must be less strenuous but we hope that this affliction may not prove permanent. We pray for him many years of service.

John was baptised on 11 April 1853 at Brompton by Northallerton, Yorkshire. His parents were Thomas, a railway labourer, and Mary Ann.

John started work with the Post Office in March 1878.

John married Hannah Foggin (b abt1855) in the spring of 1875 in the Bedale Registration District, Yorkshire. Census returns identify one child.

John’s death was registered in the spring of 1938 at Thirsk, Yorkshire.