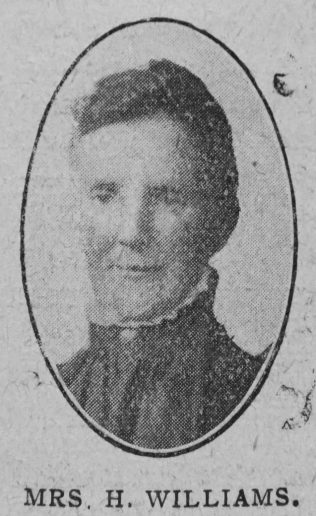 In the passing away of Mrs. H. Williams, of Fronhmlog, Llansaintiffraid, a great loss has been caused to the Llanymynech Circuit, and to the Wern Society in particular, where she acted as Society Steward. After terrible suffering for twelve months, borne patiently and cheerfully, she passed to the Home of rest and peace, on Sunday, August 11th, 1918, leaving behind her, husband, son, and daughter to mourn her loss.

Her Christian character was clear and transparent. Having been cradled and nurtured in Primitive Methodism, she followed in the steps of her sainted parents, who had rendered yeoman service in the cause of God. Her great devotion and generous consecration were manifested in all she did. She was ever ready to render help to any and all who needed. It was her joy, annually, at one of the Circuit Quarterly Meetings, to provide a sumptuous repast for the officials attending, and in many ways she manifested practical interest in the service of God. It can be truly said of her, “She hath done what she could.”

In her affliction, she was often visited by the Circuit Minister, who found her ever cheerful and bright. A few days prior to her decease, she said: “This affliction is to try me,” but her faith was unshaken, and in peace she passed home to God.

She leaves a worthy example for others to follow.

Elizabeth Beddow was born in 1864 at Welshampton, Shropshire, to parents Richard and Maria. Richard was a labourer.