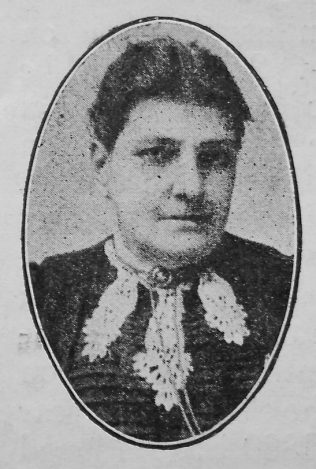 Transcription of obituary published in the Primitive Methodist Magazine by J.D.T.

Tamar Matilda Wells died at Blackpool, Feb. 4th, 1907, after a long, lingering, and painful illness, borne with most exemplary patience and fortitude. She came originally from Lincolnshire, being born at Kirton Lindsey, on May 30th, 1852, and resided there until she was twenty-two years of age, about which time she was married.

Her husband and herself then removed to Handsworth Woodhouse, near Sheffield, where they resided eight years, and afterwards to Parkgate, in which and the neighbourhood they spent over eleven years, coming to Blackpool in 1894, when the Rev. J.F. Sherman was the minister. Mrs. Wells had joined our church at Kirton Lindsey before her marriage, and while she was yet only eighteen years of age, maintaining an unbroken membership up to the time of her death. She was goodness and gentleness personified, and indeed in the last few months of her life a marvel to all who saw her.

Her concern for our church and its prosperity was at all times keen and strong, and in her quiet but effective way she faithfully served its interests. No one was more regular or fervent in attendance at, and enjoyment of, the services; and she passed away with the satisfaction of seeing her daughters and sons-in-law as closely attached as herself to the Church. One of the latter is our organist, and the other a Society Steward. Her husband who survives her is also one of our trustees. She always retained a deep interest in the scenes of her birth county, and I recall the deep pleasure with which late in life she read George Eliot’s “Mill on the Floss”—the locality of which she knew intimately. She was emphatically a good woman.