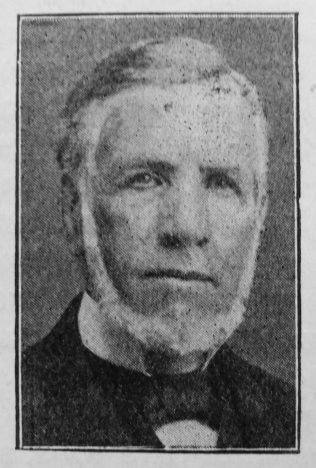 Mr. Whitfield was one of a large number of men who, coming from neighbouring dales and rural districts, have enriched our churches in the industrial centres of the North of England. Natives of Swaledale, his parents removed to Westmoreland where Mr. Whitﬁeld was born, December 6th, 1825. In 1844 they came to Crook in the county of Durham. Crook was then emerging from a small hamlet, with its few thatched cottages, farmstead or two, its smithy, flour mill driven by water power, its fine green in the centre, and was becoming a colliery village with workers coming to it from all quarters. Its present inhabitants number over 11,000; but that gives little idea of its importance, as it is the mart for a surrounding colliery population much larger than its own.

Few particulars are available as to how Mr. Whitfield’s conversion was brought about; but he owed much to his mother every way. She was a fine Christian woman, a devoted member of our Church, and left her impress on her son. One of the joys of her life was that of having entertained Hugh Bourne while on a visit to Crook in 1847.

At twenty-two we find Mr. Whitfield an active and reliable member of our Church in Crook; aiding in the erection of the first chapel and in the formation of a Sunday School. In 1850 he took to wife Mary, daughter of Mr. Ralph Burn, of Toft Hill, a man of fragrant memory. Intelligent and kindly, she looked well after the affairs of her household and was in all respect a great help to her husband. She died in 1898.

For a period of fourteen years Mr. Whitfield was an employee of Mr. James Wilson, provision merchant, and no man ever had a more faithful servant. In 1864 he launched out in the same line of business on his own account. By a fine blend of caution, enterprise and honest dealing he put himself in a position to spend the last seven years of his life in quiet and comfortable retirement.

When the writer went to Crook in 1869 in succession to the late Rev. E. Rust, the fine new chapel had just been built. Church and congregation were all that could be desired. At the head of the Church were stalwarts such as James Wilson, Ralph Boddy, James Willan, George Calvert, William Heslop (an ideal secretary), and last but not least, Henry Whitfield. Mr. Whitfield gave freely of his means, time and labour, and no man contributed more to the success of the Church than he.

A trustee of the chapel he was for many years, chapel steward, class leader and circuit steward. Frequently he represented his station in District Meeting and was twice delegate to Conference – Scarborough in 1877 and Grimsby in 1880.

A Primitive Methodist of a vanishing type, he was somewhat detached from some modern movements and ways of life. He may have been occasionally hasty in speech and action: but what impressed an observer were his transparent honesty and his loyalty to conscience. He was no invertebrate; nor are any of the excellent family of two sons and two daughters he has left behind. Loyal to his Church he had warm regard for its ministry, and had the pleasure of according generous hospitality to many of the leading ministers of his day.

He had read well, especially in Methodist literature. He was so conversant with our periodicals and Conference Minutes that he could locate nearly every minister, and few were better acquainted with the history and polity of our Church. But he took a wider outlook. All the churches were of interest to him, especially the sister Methodist Churches.

It was quite a treat to listen to him dilating on the causes which led to their formation, the men who had to do with their establishment, and the points of difference by which they are shaded off from each other.

As age and feebleness grew he retained his interest in church work and attended the sanctuary as often as he was able, but could render little active service. When circumstances would allow he might be seen walking feebly across the green on his way to the old business premises now taken over by his older son, Mr. Thomas Whitfield; or, finding his way to the home of a little grand-daughter – Mary Hannah Gill – who was to him in his old age much what Dorothy Drew was to the grand old man par excellence. .

He had the thoughtful and unstinted ministrations of his elder daughter, Miss Whitfield – ministrations which became increasingly valuable and necessary as his strength decreased. After much weakness he quietly passed away October 10th, 1904. On Thursday, October 13th, a largely attended and impressive memorial service was held in the Church he had helped to rear and in which he had worshipped for many years. Among those present were the Revs. J. King, M.A.. vicar, J. Stinton, (Moravian,) J. Taylor, W.A. French, C. Tetley, R. Clemitson, many of his fellow tradesmen, and adherents of our Church from far and near. His remains were laid to rest in the family burial ground in the Crook cemetery.

And so ended the earthly life of a man upright, strenuous, devout; loved and mourned by his family; and of whom it may truly be said that “after he had served his own generation by the will of God he fell on sleep.”
“Now the labourer’s task is o’er,
Now the battle-day is past;
Now upon the farther shore
Lands the voyager at last.
Father, in Thy gracious keeping
Leave we now Thy servant sleeping.”

Henry was baptised on 18 January 1826 at Stainmore, Westmorland. His parents were Thomas and Betty.