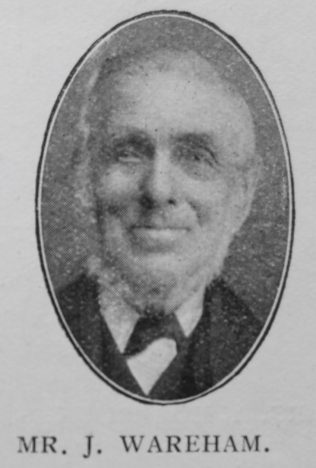 Transcription of obituary published in the Primitive Methodist Magazine by Geo. E. Rudram

In the passing of John Wareham, the Mansfield Circuit has lost its oldest member and official, and one of its truest saints. Our departed brother spent the whole of his career in Mansfield Woodhouse, in which parish he was born in December, 1829. He was converted at the age of 11. Four years later he joined our Church, of which he was a devoted member for 67 years.

With the exception of being a local preacher, he held at different periods every office in the church and school. In one office, perhaps, he constituted a record: for 63 years he was leader of the same Society class.

John Wareham’s was a fine type of an entirely consecrated life. The church had the first claim upon his time, money and service. For years he, with Brother A. Chipp (who still does the work), cleaned our large and beautiful church at Woodhouse gratuitously. His Christian influence was felt and acknowledged beyond the bounds of his own church. As a visitor of the sick, he practically shepherded the whole village. Many times was he called up at night to pray with the dying. He was great in prayer. The writer often marvelled at his wonderful public prayers, but at his own family altar he was heard at his best.

Mr. J. Wilson, his son-in-law, writes:— “Father was never happier than when giving us counsel and imploring us to love the Saviour. He was greatly loved by all who knew him, and will be missed very much in the village and in the church, but none will miss him as we do.’’ His Christian influence at home has been rewarded by the conversion of all his children, who are now devoted to our Church. One of the daughters became the wife of Mr. J.G. Marriott, a leading layman in the North of England.

Like Scott’s “Old Mortality,” John Wareham had a deep reverence for departed worthies. On the day before his death he laboured with spade and shears to tidy the graves of some of his old church comrades. Although warned by his friends not to over-tax his strength he would not spare himself until the last grave had received the ministry of his loving hands. The toil proved too much. Feeling an attack coming upon him he staggered home, and there, after several hours of great pain, passed to the Heavenly reward on Friday, July 7th.

After an impressive service in our Woodhouse Church on July 8th, his remains were laid to rest amid many tokens of love and respect. Our brother possessed a generous and most lovable nature. To him “the things of the Spirit” were most real, and through him faith became much easier to others. He rests from his labours but his works follow with him.

John was born in December 1829 at Mansfield Woodhouse, Nottinghamshire. His mother, Ann, was widowed before 1851.