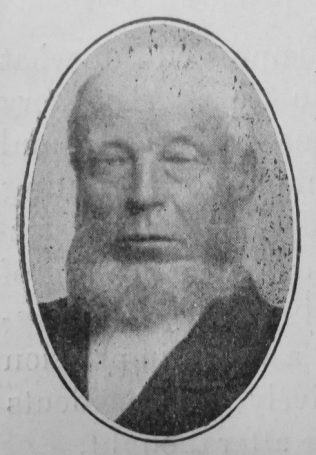 For many years Mr. Warren was connected with the Primitive Methodist Church. While not permitting himself to be made very prominent he was a very useful member and deserving honourable mention. For several years he lived and rendered good service at Nettleton. At Snitterby Carr in the Brigg Circuit he gained the confidence of both ministers and members. A little more than twenty years ago he removed to East Halton in the Barton-on-Humber station, and soon commended himself to the people there and won their respect. A couple of years ago, having become aged and unable to follow his usual employment, he retired from farming and settled at Osgodby in the Market Rasen Circuit.

Being physically strong he was able to do a great deal of hard work, part of the advantages of which were enjoyed by the societies with which he was connected. His long life of seventy-eight years was fairly favoured by prosperity in material things, but like most farmers of long standing he had losses in business, which of course were felt by him, but his greatest sorrow arose out of the loss of close relatives who departed this life years before he was so promoted. He also had pain and sorrow a few years ago arising out of the loss of one of his arms; but whatever his lot he gave evidence of trust in God. His somewhat large family he sought to lead to devotion to his God and his church, and had the joy of seeing several of them one by one converted and added to our church, and quite a good number of these have become useful in preaching the Gospel, or in other work intended to extend the Kingdom of our Lord.

After much suffering, patiently endured, our friend of many years, on July 30th, passed into the more immediate presence of God.

On August 1st, the writer and Mr. Joseph Green conducted a solemn memorial service in Osgodby Chapel, after which his remains were reverently conveyed to East Halton and there laid to rest until the resurrection morning. Our prayer is that all his surviving relatives may meet him in heaven.

He married Alice Graham (1859-1924) in late 1895 in the Glanford Brigg Registration District, Lincolnshire.