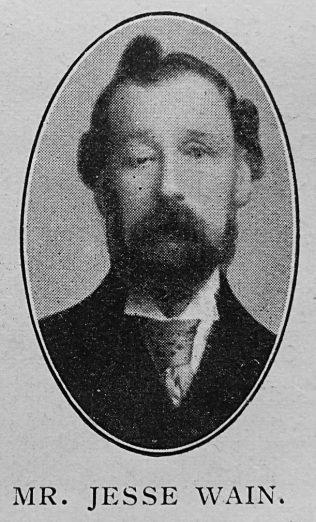 Transcription of obituary published in the Primitive Methodist Magazine by J.L.

The church at Claremont Street, Leicester, has just been made consciously poorer by the death of Mr. Jesse Wain. For forty years he was a member, for eighteen an efficient Society Steward, and for thirty-five a teacher and eager worker in the school.

In the early period of the Church’s history, when the demands and responsibilities were considerable for so feeble a society, he gave unstintedly of his labour and substance, and with other noble and devoted men, made its present strength and prosperity possible.

Of broad and aggressive mind, quick and kindly sympathies, he won easily the confidence and friendship of young men and women. He worked earnestly for all institutions and efforts to interest, benefit, and attach them to the church. He urged that the Church should provide social organisations and recreations for young people, and assume a kinder and more hospitable attitude towards them, when these proposals were not so popular and possible as they are to-day. He preserved his own youthfulness of nature and interest in the school and young people to the end of his life.

He was a militant politician, an active social reformer, and a ready servant of all movements extending the rights and welfare of the people. His social theories were more advanced than those of his friends, but behind all his public advocacy was a wealth and vigour of sympathy, conviction and sincerity, that gave power to his appeal and influence. He did good work for the poor of his neighbourhood, on the Board of Guardians, and local Charity Boards.

But he will be remembered in his Church and locality as a man of integrity, who lived a useful and upright life, with clean associations, and free from any reproach. He had a mind well furnished, a capacity for friendship, and was distinctively religious in spirit and attitude.

Jesse earned his living as a stone mason.

He married Louisa Clayton (1853-1927) in the spring of 1876 in the Barrow upon Soar Registration District, Leicestershire. Census returns identify four children.