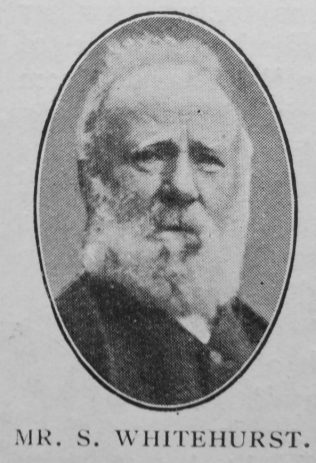 Samuel Whitehurst passed away on Friday, November 5th, 1909, at the ripe age of sixty-eight years. He was one of the quiet workers in our Church, and for over thirty years he rendered splendid service as Trustee, Society Steward, and Sunday School official in the Bollington Church and Sunday School. He was a loyal Primitive Methodist. His four sons and two daughters are all connected with us. Shortly before he passed away he said to his loved ones as they were standing round his bed, “Don’t neglect Chapel.”

Rev. J. Brodley, of St. Helens, writes, “I had the utmost respect for our departed brother, because of his sincere devotion to the cause of God, his love for the Church and Sunday School. He was one of God’s humblest and most loyal servants, one who made the lowliest work assume a dignified position by the importance he attached to it as a part of the work God.”

An impressive service was held in the church on Tuesday, November 9th, conducted by the writer, after which the interment took place in the Bollington Churchyard. On Sunday evening, November 14th, Rev. C.T. Bishell conducted an “In Memoriam” service in our Bollington Church, and made special reference to the manly qualities and sterling worth of the departed to a large and sympathetic congregation. “To them, who by patient continuance in well-doing, seek for glory and honour, and immortality, eternal life.”

Samuel was born abt1841 at Bollington, Cheshire, to parents Thomas Whitehurst, a card grinder (1851), and Margaret Lomas. He was baptised on 4 April 1841 at St John, Bollington.