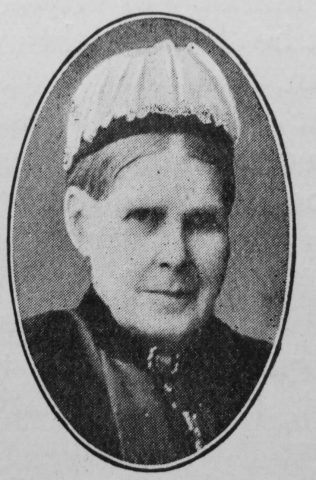 Sarah Widdowson was the product of village Methodism, and was born at Welbourne, Lincs., on April 1st, 1826.  In consequence of her mother’s death, there rested upon her in early life the responsibilities of a large household. Her father, a yeoman farmer, opened his barn for preaching services to the Primitive Methodists when they visited her native village, and his house became the preachers’ home as they laboured in that district. Mrs. Widdowson’s conversion took place at a camp meeting lovefeast in 1837, and she forthwith allied herself with our people.

She retained her connection with the church at Welbourne until her marriage at Nottingham, in 1854, to the Rev. W.R. Widdowson, when she commenced the arduous duties of a travelling preacher’s wife. In her new sphere she manifested the same enthusiasm as characterised her earlier days. Many of her associates in this early church work bore names which have now become historic, amongst which we find Thomas Baron, William Jefferson, John Dickenson, Robert Parks, John Barfoot, and many others whom we lovingly cherish.

For upwards of seventy years her life was interwoven with the history of Primitive Methodism, and for fifty-four of these years she was the wife of one of its ministers. In those earlier days of small salaries, scantily furnished homes, and long journeys on wide circuits, she did her duty uncomplainingly and “endured as seeing Him who is invisible.” She went in and out among the people where her life was an open book, living the Gospel her husband preached, and to the extent of her ability, and consistently with the claims of her own home, did what she could for building up the churches. It was the supreme joy of her life to know that Zion prospered, and as a very successful class leader she contributed invaluable service to that end. Her home life was of a high order as is evidenced by its fruit in the evolution of her family’s character, and their membership in the church of their parents.

Four days before her translation her husband asked if she had any message to send to the children. She struggled to make herself understood, and then faintly whispered as her dying legacy, “Oh, tell them to be good.” That is the history of her life condensed into a sentence. A finer no one could leave, a richer no one need desire. She lingered until the evening of Tuesday, April 28th, when she entered upon the fuller vision and the larger life.

From the commencement of her Christian life she constantly avowed her discipleship, and her experience was of a high type. Her confidence in her Heavenly Father remained unshaken even when her heart was almost broken by successive bereavements. Hers was a character of the saintly quality, and the sanctifying work of the Divine Spirit gave her an instinctive trust in the wisdom of Infinite Love. We know that she lived well, and when the hour came she entered “the valley of the shadow” as she would have gone through the gateway of a palace, to the heaven of eternal light.

She married William Reuben Widdowson (1826-1910) in the spring of 1854 at Nottingham. Census returns identify five children.