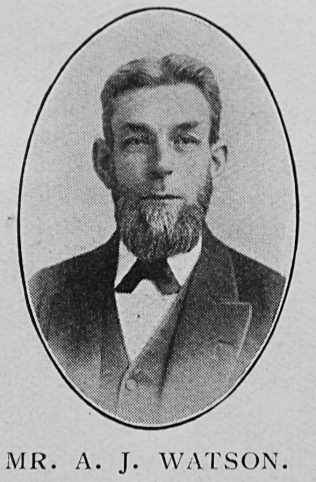 Transcription of obituary published in the Primitive Methodist Magazine by J.N.

Arthur J. Watson was born at Ryburgh (Norfolk) in 1851. Subsequently he removed to New Walsingham, where he carried on business as a harness-maker for many years. He joined the Church as a young man, and served as a local preacher 40 years, and in addition held many offices in the Walsingham Society—School Superintendent, Trust Treasurer, and Society Steward. Faithful in the discharge of all the duties allotted him, he loved his Church and was proud to be in the service of Christ.

He gave of his best for the Circuit, and many have been converted as a result of his preaching. Especially did he interest himself in the young people. Not long before his death, he was the recipient of a medal for long service as a S. School teacher. In recent years he was elected to the position of Circuit Steward, and it was his delight to consider the interests of the station.

His fatal illness was long and painful, but he never lost his faith and hope in God. The end came peacefully on Friday, April 22nd. The funeral service was conducted by Revs. T. Woodall, A.W. Edwards, J. Davidson, and John Norton. A great number of people attended, including the children of the Sunday School, representatives of every society in the Station, and the members of the Oddfellows Society, with which the deceased was connected. A touching and fitting address was given by Rev. A.W. Edwards, in which he spoke of the great loss sustained by the Church and Circuit. A son and two daughters, all of whom are members of our Church, mourn his loss; to them he was an affectionate father.

We could ill afford to lose him, but God’s will must be done. May there be others to fill the place he occupied so worthily.

Arthur was born in 1851 at Little Ryburgh, Norfolk. I have not been able to identify Arthur’s parents in online records.