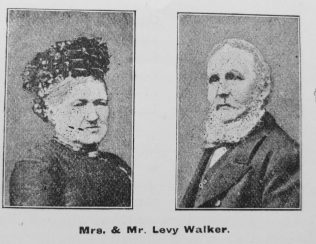 Transcription of Obituary in the Primitive Methodist Magazine by Thomas E. Currah

Mrs. Walker fell asleep in Jesus on Monday, Jan. 6th, 1902, and on the 29th of the following June her husband also entered into rest. At the time of their decease they were each eighty years of age. Mrs. Walker, whose maiden name was Elizabeth Butten, was a native of St. Blazey, Cornwall, from whence, at the age of 17, she removed to Jersey. Mr. Walker, who hailed from Colingbourn, Wiltshire, came to live in Jersey about the same time. They were married over fifty-eight years ago and have been members of our St. Heliers society for about fifty seven years. They were both converted under the ministry of the late Rev. Mr. Knox. In the home, in the business and in the church Mrs. Walker was a true helpmeet to her husband. There was a complete identity in the purposes and interests of their lives. In her earlier years she was a woman of great vigour and this with her strong individuality enabled her, with a cheerful confidence, to hold up under difficulties, or push ahead through them, that would have dismayed feebler souls. Year in, year out, for fifty years she, with her husband, and a few other loyal souls, bore up under the severe financial strain involved in keeping Primitive Methodism alive in Jersey. As a church, our debt to such faithful, humble members is simply incalculable. Ministers come, to soon leave again, but with the loyal few of the church their ever remains the serious burdens of the church. Yet these burdens never frightened her nor those who worked with her, (some of whom remain with us in honour to this day) but, through good and evil report, she held on steadily, patiently and hopefully to her allotted task. Next to her own home the church held the first place in her affections, and I am certain of this that not seldom in her home many quiet sacrifices were made for the house of God. She met with God’s people so long as she was capable of walking a few steps at a time. There was no lingering sickness. She was simply worn out and died as easily as a tired child going to sleep. It was touching to see how at the last she went back again to her early married life and asked for the children. She has met some of them now in the fair land where death never deals his cruel blows.

Of Mr. Walker it is difficult to speak too highly. His was an unusually sweet, unsuspicious, loyal nature, but by no means wanting in strength and decision. In questions of conscience and duty he was as inflexible as granite. He was content to walk slowly so long as he felt the solid ground under his feet; he loved certainties in business and religion, and left to others the more adventurous and dangerous flights of speculations. He read his bible and believed it simply and strongly, and it did him good and others through him. His love to Christ enlarged him as higher education could never have done; in his Christ-filled soul there was no room for unmanly pettiness or self-seeking. It would be impossible to imagine either church or minister ever having trouble with him through fractiousness or inconsistency. He was a very safe asset in church life. In his old age he was gladdened by its prosperity, a prosperity for which he had incessantly struggled, given and prayed for half a lifetime. He must have been a trustee for at least fifty years. The very cottage in which he died was made to him more sacred because in the far past it had been the Primitive Methodist preaching room. Often and again he would, in the early days, as Sunday School teacher, or visitor, take his dinner when going to our various missions in the Island, and after the service sit down quietly under a hedge and eat it, thanking God that he was counted worthy to serve Him. On these occasions he often took his children with him, no doubt to their delight and profit. And one thing he was very particular about, and that was, they were never allowed to tittle-tattle about the church or any of its members. Slanderous tongues he abhorred and to mere rumour he ever turned a deaf ear. To-day all his children belong to our church, one of his sons-on-law, Mr. W. Husband, being the society steward and a local preacher. The various services, week-nights and Sundays, he never missed. It really  did one good to see what a real pleasure they were to him, and this in spite of the fact that he could hear very little in his later years. It was pleasant to see his fine venerable face shine with exultant joy as he watched the chapel fill up on a Sunday night; and his lips move in muttered prayer and praise. The brave old heart was at last blessed with the joy of the harvest for which it had so long wept and prayed. By common consent he prayed first in all our prayer meetings, and the simple earnestness and sweetness of his prayers were very affecting. The last time the writer saw him he was just lifting his face to the heavens and beginning to lead his last prayer meeting. Surely, a beautiful memory of the old saint. Two weeks later I was recalled to the Island to bury him. His was not the heroism of a blatant jingoism with its fanfare of trumpets and monied rewards, but the heroism of the steady up-hill pull of a lifetime against fearful odds, “which asks for no reward, except to serve Thee still.”

On July 2nd he was carried into his dearly loved chapel for the last time, and then laid to rest amid every token of affectionate respect from the officials of the church. At the close of the service a gentleman, quite unknown to the writer, stepped to the edge of the grave and quietly said, “There lies a man who for many years did all the work required on my property, and a more trustworthy, a more upright man I have never met with.” So may we, 0 Lord, walk before Thee with the humility of holiness all the days of our life. His work was done, splendidly done, and all is well. He and his good wife travelled a long and honourable road together and in death they were not long divided. This is as it should be. His memory is a precious heritage to his church, – a memory of transparent goodness, consuming love to Christ, and steady, fervent devotion to Jersey Primitive Methodism.

Levy Walker was born abt 1822 at Colingbourn, Wiltshire. His father was James Walker.