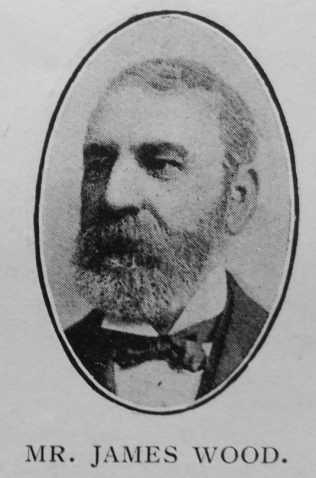 Mr. James Wood was born March 31st, 1843, at the Hough, in the parish of Wybundbury, where his parents kept a public-house. He received the rudiments of education at the parish school, and afterwards used his leisure hours for study. His mental attainments were of a high quality. Early in life he settled at Willaston on the Crewe Circuit, where he established business as a builder, which became a sound and flourishing concern.

He took the deepest interest in the political, social and moral affairs of the place, and was a member on all the public bodies of the district, including the Cheshire County Council. Connected with our Church for forty-nine years, for forty years he filled the position of local preacher, and his services were in constant request throughout the district. No local preacher in the Tunstall District rendered greater service, or preached more special  sermons than our friend.

In his youth he received a pressing invitation to enter the ministry, but for family reasons declined; but the amount of evangelistic work he gave to the Church can never be estimated, He usually found time to accompany the minister in visiting the members of the church and congregation before the weekly preaching, and if any needy case came to his notice he readily gave relief. He rendered valuable service in our higher courts, and was a well-known figure at both District Meetings and Conferences.

In all this work he found a true help-meet in Mrs. Wood, an estimable lady whose praise is in all the district. In his sixty-fifth year, worn out with excessive toil, he was called to the higher service; and on June 23rd, 1908, he “crossed the bar.” The funeral, which took place at Nantwich Cemetery, was of a very large and representative character, testifying to the high respect in which he was held.