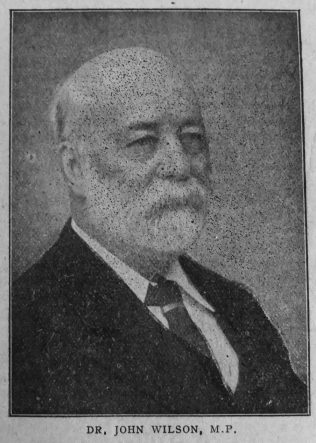 By the death of John Wilson, Primitive Methodism has lost one of her most distinguished sons, the Labour Movement has lost one of its most sagacious leaders, and the nation has lost one of its most honoured citizens. His funeral was a fine tribute to his worth, for among the crowd that gathered every great interest in the country was represented, and even Her Majesty the Queen had sent a letter of sympathy. But though a Bishop, a Dean and an Archdeacon attended the obsequies, it was a Primitive Methodist funeral, conducted by Primitive Methodist ministers. Nothing else would have been in keeping with the character of the man. He looked back upon his conversion as the turning point of his life, and throughout his long career he never swerved from the principles of his religion or slackened in his devotion to his Church. He was called to fill many parts, and he was the recipient of many honours, but he never allowed his Christian testimony to be obscured, or his religious duties to be forgotten. How great a work he achieved in the cause of labour it is not for us to say, but we may be permitted to express our thanks to Almighty God that in this age of religious indifference our Church had in John Wilson a man who was enabled to adorn the Gospel of God his Saviour in all things.

John was born at Greatham, Co. Durham in 1837 to parents Christopher and Hannah. Christopher was a labourer.

John worked as a coal miner. His two oldest daughters were born in the USA. The 1881 census identifies him as a stationer and thereafter he is secretary of the Durham Miners Association. He also served as a Liberal M.P.