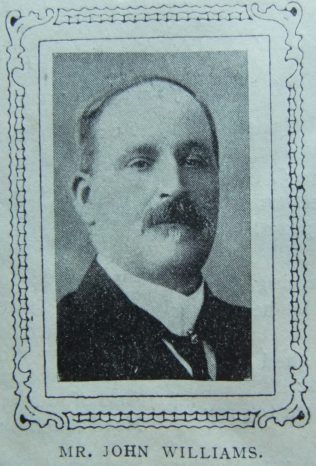 THE esteemed Society steward of Howgill Street Church, Whitehaven, is a Cumberland man. When a youth of eighteen he was invited to a Primitive Methodist Prayer Meeting held in the house of a Mr. Cooper, and there gave his heart to God. Ever since he has been a loyal and devoted Primitive Methodist on this West Coast, except for two years spent at Dipton in the County of Durham. For thirty-five years Brother Williams has been a faithful Sunday school teacher and Band of Hope worker. He has also been assistant superintendent of the school; the work among the young having for him an irresistible attraction. It has ever been a great joy to him to induce young men to take up the service of Jesus Christ. God has put many such seals upon his service.

Brother Williams is also keenly interested in the Y.M.C.A., and does not stint his service to it. He is also an active Freemason and has gained many honours from the Lodges with which he has been associated.

Brother Williams has held the office of Society steward for some time, and excels in the discharge of its duties. He is most regular in his attendance at the services of the church, and strives to have all things in good order. He is deeply anxious for the prosperity of Zion, and devotes his time and strength to the extension of the Kingdom of God. He is a man of peace. He has few words at any time. He neither gushes in speech nor pushes for position. His character has in it the shade which is the strength of the rocks and the mountains. He is, in short, just the type of man for the office he adorns.

I have been unable to unambiguously identify John in census returns based on the information in the sketch. Can anyone point me in the right direction?