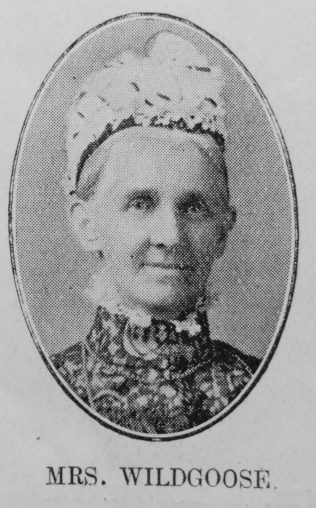 Transcription of Obituary published in the Primitive Methodist Magazine by J.H.T.

Rachel Wildgoose was the daughter of the late Thomas and Hannah Davis, of Prospect Place Hydro, and was born on April 2nd, 1837. When Primitive Methodism was introduced into the Matlock district her mother became one of the earliest members, and so from her earliest days Mrs. Wildgoose was associated with our Church. She joined the choir when a girl and remained in connection with it for fifty years. It was on her initiative that the choir at Christmas time began the custom, which still obtains, of carol-singing in Matlock and the adjacent villages, whereby large sums have been raised annually for the Matlock Bank Church. For forty years she accompanied them.

Every branch of the Church’s work found in her an enthusiastic helper, and for many years she gave the tea at the harvest festival, which was never allowed to raise less than £5 for the church funds.

She was the soul of generosity and hospitality, and during all the years that students from our college at Manchester have come to preach at Matlock Bank they have been invariably entertained by her at Oldham House Hydro, where she resided. The poor have lost in her an unfailing friend.

Her kind, gentle, and beautiful face was one to attract attention, and no one could be in her presence without realising that she was one of God’s saints. Her consistent, Christly conduct, exhibited often under the most trying circumstances, made its influence felt in her family who are all connected with our Church; and of her sons, one is circuit steward, another is a popular local preacher, and yet another is the justly-famed organist and choirmaster of the Matlock Bank Church.

She was buried in Matlock Parish Churchyard, August 23rd, amid tokens of universal regret, the funeral being one of the largest seen in Matlock for many years. The service was conducted by the Revs. J. Burton and J. Harryman Taylor, M A., the latter of whom preached at a memorial service held on the following Sunday evening when the church was crowded. Matlock is the richer in all good things because she has lived, and though her labours here are ended, her works do follow her.