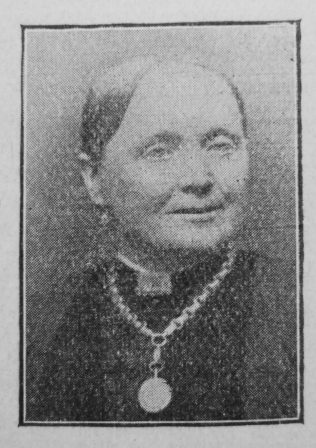 Transcription of Obituary in the Primitive Methodist Magazine by J.C. Livesey

Elizabeth Wharmby, the beloved wife of Mr. William Wharmby, of 27, Calder Street, Colne, Lancashire, in her younger days was identified with the Sunday School and Society at Broadbottom, in Glossop Circuit, and took special interest in the choir of which she was a member, walking three miles to the choir practices with earnest delight and pleasure. She also attended the other services of the sanctuary during the week, in addition to the regular Sabbath worship, and thus gave early evidence of the sincerity of her devotion to the cause of her Master, and the Primitive Methodist Church of which she was so valuable a member and worker.

In 1868 she was married to Mr. William Wharmby (who was a member of the same Society, Sunday School, and choir), and from the beginning of their married life it was a great pleasure to them to open their house as a home for the preachers and others appointed to conduct or take part in the services of their place of worship.

In 1874 they removed to Hareholme, in Helmshore Circuit, and here Mrs. Wharmby at once entered with great interest, into the Christian work of their new home; and her kind-heartedness was often seen, and her generosity shown in providing Quarter-day Teas, Choir Tea at Christmas, etc., in addition to the usual routine of Christian service.

In 1884 she removed to Colne, but in consequence of the effects of a long period of hard work in business, her health began to be only very delicate; in consequence of which she was unable to take the very prominent part in Church activities which had been her pleasure in previous places; nevertheless, she ever took a deep interest in the welfare of the Society and Sunday School, and by repeated enquiries of others, kept herself mostly in touch with the varied operations of the Church with which her lot was now associated.

For a considerable period of time she was unable to attend a single public service, yet the visits of her minister and others who went to hold spiritual conversation and prayer with her, were always highly appreciated, and she gave evidence of a deeply grounded faith in God, in Jesus Christ, in righteousness, and the Word of Truth. She had a high regard for Christly consistency in those who were recognised adherents of the Church, and a profound contempt for every form of insincerity, duplicity, and hypocrisy, and at times expressed her convictions in scathing terms.

For some years her sufferings were at times very severe, and in spite of the best medical advice and attention, acute anaemia set in, which culminated in her changing mortality for eternal life on Monday, February 7th, 1904, having been unconscious for a considerable length of time. Her end was peaceful, and in a few semi-conscious moments she tried to sing some of the old hymns of bygone years, but more especially the hymn,
“I heard the voice of Jesus say,
Come unto Me and rest,” etc.

After a service conducted in the house by the Rev. J. C. Livesey, the funeral procession was accompanied to the Colne Railway Station by several friends, and members and officials of the Colne Society.
Thou art gone to the grave! but we will not deplore thee,
Whose God was thy ransom, thy Guardian and Guide,
He gave thee, He took thee, and He will restore thee;
And death has no sting, for the Saviour has died.

Elizabeth, also known as Betty, was born to parents James, a labourer, and Martha.

She married William Wharmby (1843-1929) on 13 April 1868 at St John’s, Godly, Cheshire. At the time of their marriage William was a labourer. Later he became a grocer and assurance agent.