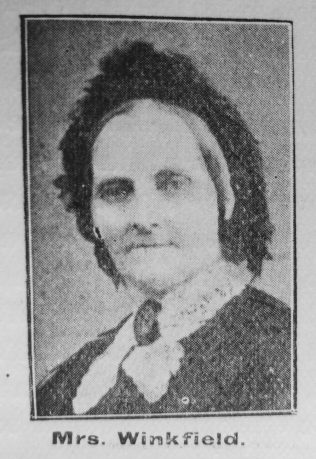 Transcription of Obituary in the Primitive Methodist Magazine by A.T.W.

The Lynn Circuit has lost its oldest member by the decrease of Rebecca Winkfield, at the advanced age of 81 years, and after an unbroken fellowship with the church, extending over 71 years. Mrs. Winkfield, whose maiden name was Moore, was born on September 1st, 1821, at Mintlin Lodge, near Lynn. Her parents, though poor, were respectable, and lived on the estate of Richard Bagge, Esq., for many years. Rebecca’s father and seven of his ‘children were converted, about the same time, under the preaching of our early ministers, and straightaway joined the infant church. Rebecca became a member of the class of which her mother was the leader, and received her first class-ticket at the hands of the late Rev. J. Smith, one of the most successful soul-winners our church has ever known. When barely sixteen years old, Rebecca was placed on the plan as a local preacher, and having many gifts and much grace, she was both popular and useful. She was in great demand as a special preacher at camp meetings and anniversaries, and God gave her many souls as seals to her ministry. It was through the preaching of this godly maiden that the now glorified John Allison and William H. Meadows entered the ministry of our church, both of whom were successful fishers of men. Three times, and by as many circuits, Rebecca Moore was called upon to undertake the duties of a travelling preacher, but because of indifferent health she steadily refused. In this we think she acted wisely, though it was not easy to withstand the persistent entreaties of her friends. Declining to enter the regular ministry she rendered valuable and unstinted service to her native circuit as a local preacher, and as a class-leader for more than half-a-century. Her class meetings at Highgate and London Road were the means of bringing a great many people into the fellowship of the church.

In early womanhood our friend became a total abstainer in an unusual way. She had tried to persuade a man, who was an excessive drinker, to take the temperance pledge. He vowed he would be an abstainer if Rebecca would pledge herself to drink only water for seven years. So intent was she on saving this man that she accepted his proposal. She took the pledge and in doing so saved a man from drunkenness and began, what was to be, a long life of total abstinence, and a long time of service in connection with all kinds of temperance work.

When twenty-five years old, Rebecca became, the wife of George Winkfield, brother to the late Rev. J. Winkfield, and one of a large number of sturdy local preachers, who by their character and service, made themselves and the Lynn Circuit famous throughout East Anglia. Mr. and Mrs. Winkfield had the joy of knowing that every one of their seven children was converted in early life and in various ways they have served the interests of the church.

Left a widow several years ago, Mrs. Winkfield went to reside with her daughter, Mrs. Goodson, also a local preacher at Lynn. As long as she was able, the dear old lady attended the London Road Chapel on Sundays and her class meeting on the Thursday night, and found great delight therein. She really loved the sanctuary and the means of grace, and it seemed a great grief to her when years and infirmities kept her away.

During the last two years she was confined to her bed. Myself and others often went to see her. She was always peaceful and confident. Christ was precious to her and she longed to go to Him. After experiences of rapture and triumph she quietly passed away on June 8th. The body was laid to rest in the Lynn Cemetery, the service being conducted by the resident ministers. The Rev. G. Bell preached a memorial sermon to a great congregation in the Lynn Chapel, and specially alluded to Mrs. Winkfield’s life and work.

Rebecca was born to parents Atkins Moore, a butcher (1841) and Rebecca.