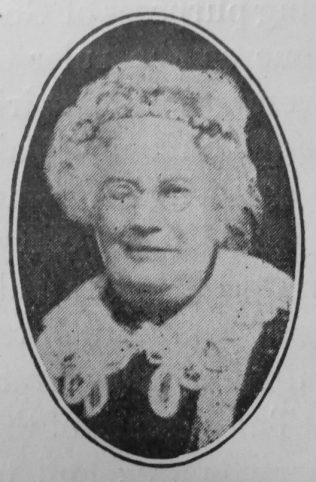 The Ulceby Society and the Societies generally in the Barton-on-Humber Station have suffered great loss in the death of Mrs. West, at eighty-five years of age. She had long been associated with our Church in North Lincolnshire. Born at Hagworthingham in the Horncastle Circuit, she very early in life came to live at Kirmington, in Barton Circuit, and remained there until she became the wife of the Rev. George West. Along with her devoted husband she was connected with the ministry on the following stations: Scotter, Scarboro, Kelsale, Guernsey, Peterborough, Chalfont St. Giles, Spilsby, and London. During those years it was well known that she rendered very useful service.

On her husband’s death (about 1870) she came back to the neighbourhood from which she had gone into the ministry.

When young she delighted in attending the public services, and when age with its infirmities came, she still in many ways helped the good work carried on.

Her house was the home of the superintendent minister and of many local preachers when they visited Ulceby, and very many can bear testimony concerning the kindness shown by her towards the servants of the most High God. For many years she was a donor on the list of the missionary funds and all schemes for the advancement of the church had her generous support.

One of her last gifts was a large quantity of crockery for general use by our church in Ulceby. When near to death she was much interested in our Centenary Fund, and to the writer expressed the intention to render aid. Her will also provided that £20 should be handed to S.M.W. and O. Fund.

She was a great supporter of the Bible Society, delighted in its annual meeting and was not fully satisfied unless one of her own ministers attended and took part in the proceedings.

She was a woman of real sincerity in religion, and when during her declining years the time came for Bible reading and prayer she ever seemed quite at home in the exercise. We have had many valuable people in Ulceby, but the general feeling is that in the death of our beloved sister we have lost one of the best the church has had.