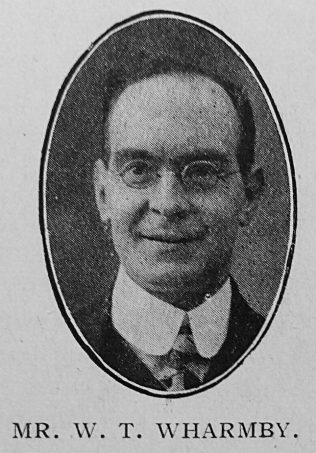 Transcription of obituary published in the Primitive Methodist Magazine by B.M.

Katherine Street Church, Ashton-under-Lyne Circuit, was sorely smitten by the passing of its much-respected choirmaster, Mr.  W.T. Wharmby. Mr. Wharmby was 36 years of age and was born at Grimsby. All through life he had a two-fold passion—for music and children. His parents were Wesleyans, and for many years he was a useful member of the Wesleyan Church.

Seven years ago he came to Katherine Street, and under his capable leadership an ordinary choir soon passed into the front rank of local choirs and acquired a local musical reputation that was second to none. His most congenial task was training choir and children for the Sunday School Anniversary. For years our brother was an active and enthusiastic member of the Sons of Temperance.

During his painful illness those who entered his sick room felt their own fortitude strengthened by his heroic example. He has ceased to suffer, but he has not ceased to serve. We are the poorer for his passing, but we are the richer for his gracious memory, his inspiring example, and his noble life.

William was born abt1876 at Grimsby, Lincolnshire, to parents Thomas, a railway signal fitter (1891), and Betsey.

William died on 1 September 1911 at Ashton under Lyne, Lancashire.