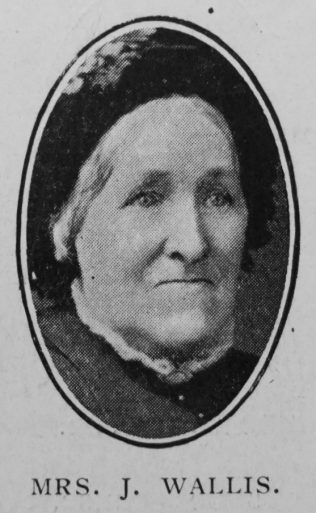 Transcription of obituary published in the Primitive Methodist Magazine by W.R.

Jane Wallis was born at Purley, near Reading, July 9th, 1820, and was married to the late Henry Wallis, for many years a loyal and consistent member of our Church. In 1853 they joined our Woodcote Society, then in the Wallingford Circuit and in a very weak state. They opened their home for the preachers and worked very zealously for our little cause. In 1866 they removed to Reading and joined London Street Church, and she continued her connection with us until July 13th, 1911, when she passed peacefully away in her 91st year.

She was a beautiful type of a Christian woman, with a sweet simplicity and childlike trust in God, regular in her attendance at class and public services and devout and consistent in her home life. During her later years infirmities confined her to her home, yet she manifested deep interest and anxiety for the success of the Church. Her cheerful disposition and hopeful spirit made her a special favourite with the young and remained with her to the end. During her illness she realised that Christ was very near and precious. Her memory lives on as a gracious inspiration to Christian living. A large attendance of friends at her interment was a fitting tribute to her saintly character and worth.

Jane was born on 9 July 1820 at Purley, Berkshire, to parents William, a labourer, and Elizabeth. She was baptised on 6 August 1820 at St Mary, Purley.