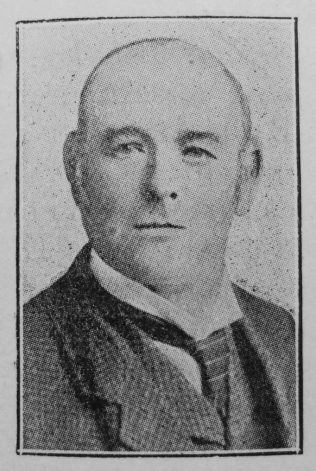 Born at Upper Cwm, June 6th, 1850, Mr. David Watkins was converted at seventeen under a sermon in our chapel by James Bevan, a local preacher. His name was soon put upon the plan and for thirty-five years he rendered valuable service as a local preacher. He and his dear wife settled in Hay in 1881 and soon became pillars in our church there. Our friend’s home was the preacher’s home and his horses at their constant service. He quickly won the confidence and respect of his fellows. His business as a butcher, farmer, dealer, brought him into contact with men of all classes, creeds and parties, and he soon became known as a man of high character. He was made circuit steward, represented his circuit in District Meeting, and discharged all his duties with characteristic thoroughness. A shrewd business man, a plain, practical preacher with a firm grip of the fundamentals of Methodist doctrine and experience, and generous to a fault he was a loyal Primitive Methodist. There were no ministers to him like the Primitives and no sanctuaries so beautiful as theirs. He was a model neighbour, ready to serve at any inconvenience. Big, generous, of plain and simple manners, hating meanness, injustice, an pretension, he was a typical Englishman. He loved his home and walked humbly with his God.

Towards the close of his life he removed to the Priory, a beautiful farm near Hay, where the disease from which he suffered developed acute symptoms and an operation became necessary. This was performed in London, but pneumonia supervened, and he passed away December 29th, 1905. The funeral was the largest ever seen in the district, his friend of many years, Rev. James Watkin, who had visited him during his illness, taking part. A granite drinking fountain and trough has been erected as a public monument, the first ever raised to the memory of a private citizen in the town. The farmers, who knew him best, chiefly contributed the money and his landlord, Rev. Mr. Spencer, the clergyman of the church, and the squire of the parish also supported it.

David was born to parents George, a farmer, and Martha.

He married Elizabeth Beavan (b abt1851) in the spring of 1875 in the Hereford Registration District, Herefordshire. Census returns identify six children.