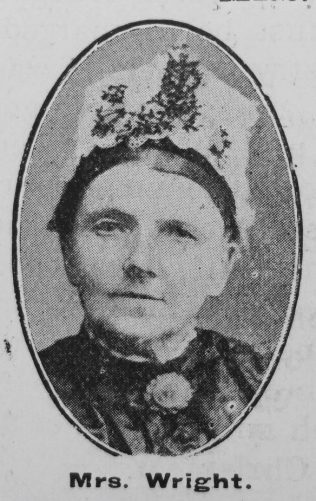 The subject of this Memoir was born at Flexton, near Manchester, June 1st, 1825, and was the eldest of eight children. She was converted at Gatley when she was fourteen years of age. The Primitive Methodists preached in a small room at that village. Here a remarkable revival of religion broke out in 1841. Many were converted, among whom were our departed sister and John E. Wright, to whom she was afterwards married. From her earliest infancy she had been the subject of religious impression, but, when once converted she set out on a Christian journey from which she never deviated till the end was reached and the goal was gained. She was married to John E. Wright, April 2nd, 1846. Between these two persons there was ever the most cordial religious understanding and sympathy. Their aims and joys were one. On removing from Gatley they resided at Northenden, and united themselves with our Church at Sale, Manchester Fifth Circuit, and eventually resided at Sale. They did much to facilitate the building of our commodious chapel and premises at that place.  Indeed the memory of John E. Wright is still green in the neighbourhood, though he has been dead for a number of years. Our late sister’s first class ticket is dated May, 1841 and each quarterly ticket had preserved up to the time of her decease – hence she maintained a continuous membership of 60 years. She was no ornamental Christian, but showed her faith by her works. Like Sarah of old, she died in a strange land, having removed from Sale to Southampton to reside with her son-in-law, Rev. T. Collins. Her devoted daughter, however, ministered lovingly to her needs, and dying was made as easy as human assistance could make it. She was brought to Sale to be buried, her body being interred beside that of her husband in the Brooklands cemetery, May 14th, 1901. She was always, while health permitted, ready to do whatever lay in her power for the Master, and was often characterised by lowly service rendered to the poor and needy. She clearly recognised that her connection with the Church brought with it obligations that must be discharged. Her support of the ministry financially was liberal and conscientious. She never forgot the date of the quarterly meeting, and even when she had removed from the neighbourhood, she retained her membership with the Sale Church, and systematically forwarded her subscriptions to the various institutions associated with it. Let us trust that as our ranks are broken, others may be raised up by God to step into the breach and follow her as far as she followed Jesus Christ.

Ellen was baptised on 17 July 1825 at Flexton, Lancashire. Her parents were William and Betty.