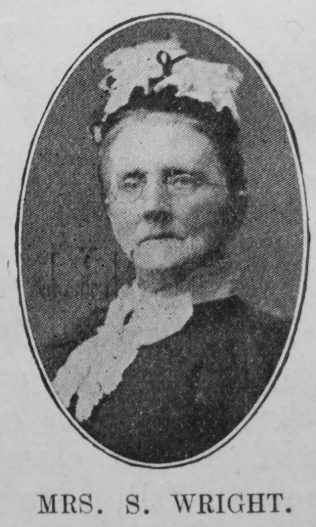 MRS. SARAH WRIGHT was born of pious parents, May 20th, 1843, at Over, Cambs., and from her earliest days dedicated her life to God. When in her teens she attached herself to the Primitive Methodists. After her marriage she frequently accompanied her husband (the late Mr. Jonas Wright) to his preaching appointments. She took a delight in singing the hymns of Zion and testifying to the saving power of Jesus Christ. In Jan. 1877, Mr. and Mrs. Wright removed to Norwich and joined the Dereham Road Church.

The finer traits of Mrs. Wright’s character shone most brightly in her home. Her children rise to call her blessed.

In 1890 she was left a widow. In this heavy trial God’s grace was sufficient, and though great her bereavement, she never lost confidence in the wisdom of the Almighty. She had sympathy with the sick, and pity for the poor. and was in every sense a worthy follower of the Lord Jesus Christ. During her last protracted illness she would lie for hours quietly praying An hour before she passed away, on Easter Sunday, her face became radiant, and with what strength she had, she bade her children thank God when she was taken, and rejoice that she was going to meet her dear husband in the skies.

Her remains were laid in the same grave as her husband’s, in Norwich Cemetery, there to await the resurrection of the just.

Sarah was born on 20 May 1843 at Over, Cambridgeshire, to parents Rezin, who worked the land, and Elizabeth.

Sarah died in the spring of 1909 at Norwich, Norfolk.