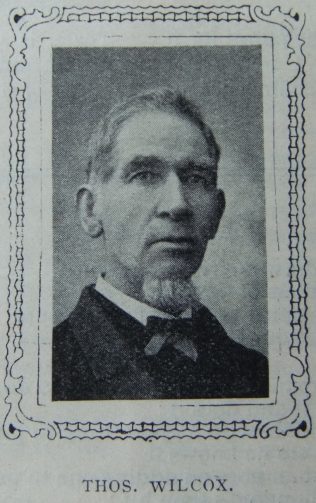 Transcription of  ‘Sketch’ in the Christian Messenger

“I have known Thomas Wilcox for 40 years. He has always been the same man in religious consistency, and I have never heard him preach without imploring the help of the Holy Spirit.” Such was the unsolicited testimony borne to the subject of this sketch by an official of high standing. Mr. Wilcox experienced the change called “conversion,” when 19 years of age at Rounds Green in the Dudley Circuit, and joined the Society class in 1860. His class leader who saw in this young man the promise of usefulness, took pains to instruct him in elementary knowledge as well as counsel him in regard to his religious life. He also received much encouragement from the late Revs. H. Higginson and S. Sanders, and was subsequently led to take appointments on the Plan. In 1866 he removed to Burslem, and finally settled down with the Hot Lane Society. Here he was soon appointed Assistant Class leader, and afterwards leader of an important class. This position he has honourably maintained for more than 30 years. He modestly says “I have given the best counsel I could to instruct, encourage and lift others nearer heaven.”

As a local preacher his services have been requisitioned in neighbouring Circuits. These in a period of 42 years have involved miles of travel and the sacrifice of home comforts. But these have been cheerfully rendered because of his heart’s desire to do what he can to help others.

Subordinating everything to religion and living near to God have not been without an influence for good on his family and neighbours.

We rejoice that his son is following his example as a leader, local preacher, and other forms of Christian activity.

Thomas was born abt 1842 at Shatterford, nr Kidderminster, Worcestershire.

Thomas worked as a coal miner for most of his life, although the 1901 census suggests he was also working as a general carter.