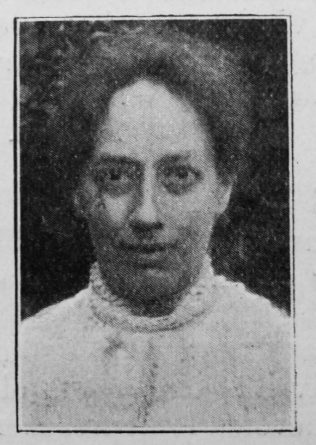 Transcription of Obituary in the Primitive Methodist Magazine by J.H. Proverbs

It is our painful duty to record the death of Bessie Wilkinson, wife of the Rev. F.W. Wilkinson, who only came to Dunstable last July. For some two or three months previous to her death she was the subject of a sad affliction, to which was added a severe form of heart disease, and though all that was possible was done, she succumbed somewhat suddenly on February 3rd, 1906. Our departed sister, by her unobtrusive goodness, made many friends here who manifested the utmost solicitude for her in her affliction.

She was born at South Harting, Sussex, in 1864, and was the daughter of Charles and Betsy Vick, who were both highly esteemed local preachers on the Buriton circuit plan. She received her early training in the Sunday School at Harting, and from her youth she was inclined to serve the Lord. For several years she presided at the harmonium at all the services.

She was married to the Rev. F.W. Wilkinson in 1885, and accompanied him on the following circuits: South Molton, Balham, Caledonian Road, London; Leyton, Hove, Woolwich, Ipswich, and came to Dunstable, July 1905.

Our dear sister was a great lover of the House of God, and a most consistent Christian, always ready to take her share in the work to promote the interests of the circuit.

The funeral took place at Dunstable, February 8th, and was attended by a large number of sympathising friends. A service was held in the chapel, conducted by Rev. J.W. Coad, of London, and assisted by the ministers of the Free Churches in the town; several beautiful wreaths were placed on the coffin. The committal service was also read by Rev. J.W. Coad. She leaves one daughter and her husband to mourn her loss.

Bessie was born to parents George, a farmer, and Betsy.