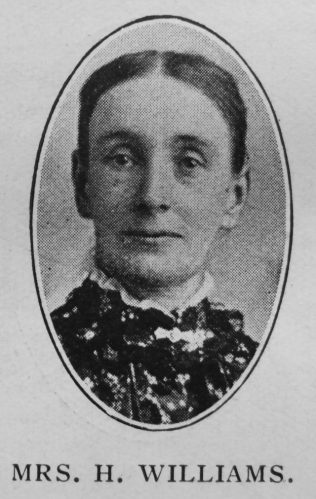 Transcription of obituary published in the Primitive Methodist Magazine by E.E.

Gentle in spirit, courageous to a high degree, consistently Christian, the influence of Mrs. Williams will remain in the home to which she contributed so largely of its best life. Besides the sorely stricken husband and children, a large number mourn their loss. No one appealed to her in vain. She lived for others. Hers was the strenuous life, and utterly worn out, she passed to the Homeland on April 4th. The end came, in her 67th year, with staggering suddenness, and amid many tokens of respect and sympathy the interment took place in Benfieldside Cemetery.

Blackhill Church (Shotley Bridge Station) has lost one of its most valued and useful members. For 25 years she had been actively identified with the progress and development of this vigorous and flourishing society. In every movement and effort her devotion and liberality were unstinted. A sane optimism, a clear insight, an untiring zeal, were marked features, yet she was quiet, unassuming, reliable. Others caught the inspiration of her presence, and with zest and earnestness carried on their labours of love.

Many have been. the tributes to her goodness and worth. The Rev. T. Elliot, Shildon, writes: “A fine Christian woman, deeply religious and attentive to all the means of grace. As wife and mother she had few equals.” The Rev. W. Raistrick, Reading: “She has entered into her rest and many beautiful memories linger of her goodness and devotion to all that is good.” The Rev. E.B. Storr, Blackhill: “She was so cheerful and brave and hopeful. Her presence at the Women’s Guild meetings was always a comfort and help to us.”

We are all the richer for having known her, and with her passing there has been granted to us a firmer belief in the continuity of life.

Hannah was born abt1844 at Rhymney, Monmouthshire, to parents James, a rail inspector (1861), and Mary.