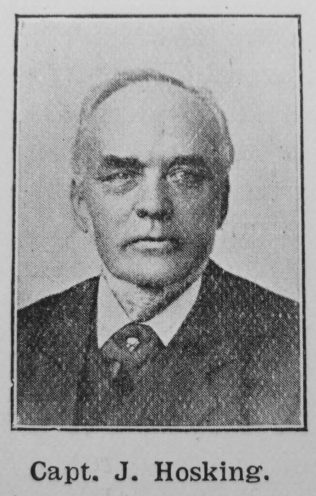 Transcription of Obituary in the Primitive Methodist Magazine by J.H. Best

On June 21st, 1901, Captain John Hosking of Redruth, in the county of Cornwall, finished his earthly course in the 70th year of his age. In his decease Primitive Methodism in the far south-west of England has lost one of its most devoted adherents and workers. Redruth was his birthplace, and all through his life he had his residence in that town, dwelling amongst his own people. In several respects his life was a striking one. When comparatively young he qualified himself and attained the position of mine captain, and after being thus employed for many years, he was appointed mineral agent, and had the direction of the mining department of Tehidy estate. Intellectually he was considerably above the average – a lover of books, a student of his times, a man of wide outlook and broad sympathies. Socially he gained a position of mark and influence, and commanded wide-spread respect and esteem. For several years he rendered service on local and School Boards: positions of this kind were easily within his reach, and undoubtedly in these respects he might have taken high place in his native town. But he elected to throw his energies into church life and work, and that which characterised him most, and for which he is best known and remembered is his close connection with, and his constant devotion and service to Primitive Methodism in Redruth and neighbourhood. His association with our church dates back to his earliest life, when, as a child, he entered the Sunday School. With this school he maintained an unbroken connection until his death, a period of over sixty years. For many years he was its superintendent, and it always held a warm place in his heart. As to the exact time when he was brought to decision for Christ and joined the church we cannot speak, but it was in his early manhood, and most likely before he was out of his teens. In 1854 he became a local preacher, and honourably held the position for 47 years. Two years later he was appointed a class leader, an office which he filled with rare devotion and success. When laid aside by the affliction which terminated in his death, he had two large classes under his care. He became a leading spirit, a very “pillar in the House of God.” In the erection of the beautiful place of worship, which we now have in Redruth, he was a principal promoter, and the success of this enterprise was largely due to his energy and generosity. For many years he was circuit steward, but apart from that he took a warm interest in all circuit affairs and every society found in him a friend and helper. In business meetings he was a tower of strength – calm, genial, and kind in bearing, wise in counsel, and commanding the esteem and confidence of his brethren in the highest degree. And outside his own circuit he was widely known and respected. But while devoted to his own church, he maintained the most friendly relations with other churches, his was a truly catholic spirit, and there was not a church in the neighbourhood but in which he was known and esteemed. His benevolence was very marked, not only did he generously support his own church, but other causes, and many of the poor and needy found in him a helper. Thus he lived, in one sense a man of the world, “not slothful in business,” daily attending to the duties of a responsible position, but withal maintaining a high character, and with unswerving fidelity serving Christ and His church.

We have pleasure in inserting the following tribute from the Rev. Jos. Reaveley, an old minister of the Redruth Circuit:-
“During the five years of ministry in Redruth, I enjoyed an intimate friendship with Captain Hosking. His loyalty to our church, coupled with the fact that his ‘praise was in all the churches,‘ made one feel proud of him. His keen interest in questions concerning the welfare of the Free Churches, and in the theological and philosophical writings of Doctors Dale, Fairburn and Horton, made him excellent company, and a good fellow-worker. In the later years of his life he was a great sufferer, and the many hours I spent with him in his sick-chamber helped to create between us an indissolubly affectionate bond. His literary and religious sympathies had a genial breadth; it was quite a usual thing after one of his violent paroxysms of pain for me to see him with countenance aglow with gratitude, perusing a book by Canon Gore with several more on his pillow from the pen of Beecher, Bruce and Stalker. He greatly relished a poetic quotation either in the pulpit or at the fireside; his choice poets were Whittier and Tennyson. He had an enlightened, evangelical faith, was full of good works, and has now, by the counsel of God, found his own place among ‘the spirits of just men made perfect.’ ”

For some years he had been in failing health, and gradually had to curtail his work, but this made more manifest the tenacious hold which Christian service, and especially that in connection with the church in which he had spent his life, had upon his heart. When frail and broken he still sought to fill his place in the House of God, and to take part in the work he loved so well. For some weeks he was laid aside altogether, and was fully conscious that the end was near, but he “feared no evil.” He rested on the Lord Jesus in the full assurance of faith, and was sustained and cheered by His blessed presence.

The funeral was a striking testimony to the life and character of the deceased. Besides the officials, members, and Sunday school scholars of the church with which he had been connected, ministers and friends of our own and other churches, representative men of the town and neighbourhood, and hundreds of the general public were in attendance. An impressive service was held in the chapel, and then in the parish graveyard the remains were interred until the day when Christ shall claim His own from the grave, and “shall fashion anew the body of their humiliation that it may be conformed to the body of His glory.”

John was baptised on 10 November 1831 at Redruth, Cornwall. His parents were John, a copper miner, and Mary Ann.

John did not marry.