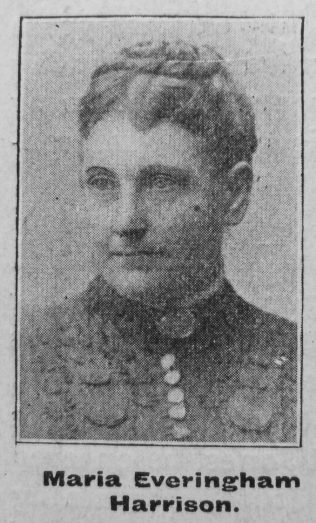 Transcription of Obituary in the Primitive Methodist Magazine by T. Buttrick

Maria Everingham Harrison, wife of the Rev. Robert Harrison, was born at North Cave, near Hull. She was the elder daughter of the late Mr. Joseph Wright, architect, whose many large chapels in and around Hull, Leeds, and Grimsby, are evidences of rare genius, and, in their beauty and utility, monuments of his keen interest in the growth of Primitive Methodism,

In Jarratt Street Chapel, Hull, under the ministry of the Rev. Hy. Woodcock, the Saviour called her, in her girlhood, to follow and know Him in the fellowship of redeemed souls. The Rev. Hy. Woodcock, writing after her decease, says, “I remember the time distinctly,” and how pleasant to an old man to be able to recall such precious memories. The reality of the Saviour’s presence and the sweetness of His fellowship increased with the years, until, on the 6th of December, 1903 (her husband’s birthday), the thin veil parted and she saw Him face to face.

Thirty-six years ago, Miss Wright and the Rev. R. Harrison entered the bonds of holy wedlock, and their married life has been well-nigh ideal. The finer traits of Mrs. Harrison’s character shone most brightly in her home. One who knew her well (Rev. H. Clark) remarks “how bright and active she was in the days of health.” With charming vivacity she was the sunshine of her home. When her health was good she interested herself with cheerful zest in all the work of the Churches to which her husband ministered. Avenues of service that were open to others were, however, closed to her.

She knew her own gifts and used them with cheerful devotion, content to do what she could. Her choicest offering to her Lord was, perhaps, in indirect service. It is not too much to say that she made possible the eminently successful ministry of her husband, and in his success found ample reward. Her solicitude for him was most tender. “If I can only help to keep you well,” she would say, “I am doing something for the Master.”

In many quiet ways Mrs. Harrison displayed a genuinely gracious disposition. The rullyman, who found a cup of tea in his hand as soon as he had deposited his book parcel on a wintry afternoon: and the printers’ boy, cheerily led to the fire while a proof was being revised, were not the only ones who shared her kindly thoughtfulness.

Her piety was that of a child, natural, happy, confident. One of the most beautiful tributes to goodness that could be earned, or desired, by any woman, was given to her memory by the maid who had been with her twenty-two years, as we returned in sorrowful procession to the lonely home after the funeral. With quiet and touching emphasis she said “Mrs. Harrison helped me to be good.”

While not endowed with the gifts of leadership, the sisterhood of the Church has always found her approachable, sympathetic, genial, and willing to help. She had neither ear nor tongue for gossip. Ever seeking to discover the good in all causes, movements, and persons, her conversation had the rare value that it could be repeated without fear of bringing its author trouble.

Her relations with the Church were thus exceedingly happy. She was ever reaping what she sowed. Her love for the House of Prayer was very real, and when for many months she was unable to go, she would console herself with the reflection that she always went when she could; and special effort was made if a local preacher was planned. The Class Meeting was to her a real “means of grace” in which she would take her part with words of cheerful testimony. One phase of the value she placed upon membership in the Church may be seen in the preservation of all her class tickets from the first.

One who travelled with Mr. Harrison for seven years writes, “She never made you trouble, dear soul. What a lover of peace she was! Every minister’s wife felt herself happy to follow her.” While a junior minister writes, “how kind and motherly she was to me.”

During Mr. Harrison’s governorship of Elmfield College, York, while as she gave herself with anxious devotion to the duties of matron, her health first began to fail, and the post had to be relinquished; the regret of the trustees being expressed in a most generous resolution. Thenceforward her affliction (chronic nephritis) often occasioned the gravest concern. With what patience and unmurmuring resignation it was borne through those eleven long years, only those know whose joy it was to minister to her needs. Two days before she entered the rest for which she had fervently longed, she said to her faithful maid, who had been to her a nurse and almost as a daughter, “Lizzie I shall look for you in heaven.” She knew the end was near, and in tones that told of glad relief she said, “rest comes at last.’’

Seized with violent convulsions she became unconscious, and gently sank into the everlasting arms of Him whose love, stronger than death, she had trusted all her life.

The many letters of sympathy from ministers and officials of old circuits, and the expressive resolutions of Circuit, District, and Connexional Courts, as also from Free Church Councils and public meetings, must have been, and will be, a source of great comfort to him whose sorrow many of us can only faintly realise.

The funeral service was held in the Jubilee Chapel, Spring Bank, December 10th, and was conducted by the Rev. S. Smith, assisted by Revs. P. Peacock, F. Rudd, W. Christie, and W.E. Crombie. Eighteen years of Mr. Harrison’s ministry having been spent in the Hull Circuits, his departed wife was well known and as highly esteemed, as the large gathering of ministers of the city and representatives of the Churches amply testified. Rev. W.E. Crombie, governor of Elmfield College (since deceased), and Rev. R. Hind represented the wider sympathy of the Connexion. The Rev. C. Spivey gave the address, and incidently remarked that, thirty-six years ago, he was one of a band of six who gathered at the altar in that house of prayer at the union that had now been severed by death. The body was reverently borne to its resting place in the grave of her father, in the sacred corner of the Spring Bank Cemetery, Hull, where rest so many worthies of our Church, by officials of the Hull Third Circuit, of which Mr. Harrison is the superintendent. The service at the grave was conducted by the writer of this memoir, Rev H.O.H. Richardson  offering prayer.

Soon after the death of the wife of the saintly George Muller he himself preached her funeral sermon from the text “Thou, Lord, art good and doest good.” In the first place, he said, God was good in giving her to me. Secondly, He was good in permitting me to have her so long. Thirdly, He was good in taking her from her sufferings to His own eternal home.

In his sorrow and loneliness we believe that our bereaved brother cherished the same spirit of resignation, confidence and thankfulness, as he awaits, in sure and certain hope, the happy reunion that the rapid flight of the years must soon bring.